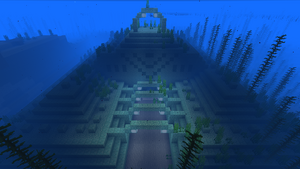 Monuments are dangerous for unprepared players, as they have many dangers, including guardians, elder guardians, and many rooms that are easy to get lost in.

Reasons for defeating a monument[edit]

There are a several benefits of defeating a monument:

The most common mob within the monument are guardians. They swim quickly, have 30

× 15 health, and have two ways to damage the player:

Each monument also contains three elder guardians. They have 80

× 40 health and a somewhat stronger laser attack which deals 8

points of damage, but move slowly and infrequently. They will also inflict any player within 50 blocks with Mining Fatigue III for 5 minutes, checking for nearby players to afflict every 60 seconds. You will want to be sure to kill the elders in a manner that counts as a player kill so they will drop wet sponges, which can be smelted in a furnace or placed in the Nether to make dry sponges. Under the Mining Fatigue, you take about 370 times longer to break blocks and your attack speed is reduced by 30%. When an elder guardian inflicts you with Mining Fatigue III, then you could drink a bucket of milk. However, drinking milk will also remove Water Breathing, and you will just get Mining Fatigue again. An easier way is to wait until you have defeated all 3 elder guardians before drinking milk. Until then, simply don't break blocks, and travel only through pre-made passages. If you must place blocks, such as in the case where you need to run around a pillar to break line of sight with the guardians, use slime blocks, honey blocks or TNT. Slime blocks, honey blocks and TNT are breakable instantaneously even under the effect of Mining Fatigue. There are still ways to brute-force your way into a monument, which is covered later.

Monuments are found only in deep ocean biomes, so you'll need to find an ocean and explore it. Being underwater, the monument may be difficult to see, but the sea lanterns are distinctive and are easily visible if you're looking for them, especially at night. The top of the monument is generally close to the surface, making it possible to search for it in the day, however it is easier to miss. You can also listen for the sound of guardian lasers as they attack squid.

In Bedrock Edition, the seed picker includes a world called "Ocean Monuments Ahead", which has multiple monuments reasonably close to the spawn point. In fact, you can easily see one of the monuments from the northeastern shore of the small island on which you spawn. This is an island survival world; it is possible to defeat the nearest monument, but see Tutorials/Island survival for survival tips.

Equipment that is particularly helpful when infiltrating a monument:

The first step is to get inside the monument, which can sometimes be difficult as guardians spawn outside the monument and will attack you. There are several ways you can get in:

Once inside, it can be advantageous to set up a base of operations. Doors or slime blocks can be used to seal any entrances to a chosen room, and sponge blocks can be used to quickly clear it of water. Then you might move in resources such as furnaces for drying sponges, chests to hold potions and other supplies, a bed in case you die, a nether portal for easier access via the Nether, and a cow for milk refills.

A conduit can be set up in a 3 block high undrained room for up to 31 blocks worth of Conduit Power merely by placing a slime block, honey block or block of TNT on the floor one block diagonally in from the corner, placing the conduit on top and breaking the block. This removes any worries about air and helps speed up breaking through the prismarine if that is necessary.

Your goal inside the monument is to take out the elder guardians to eliminate the Mining Fatigue III that hinders your ability to obtain the resources from the monument. There are three per monument: one in the "penthouse" at the very top and one in each of the wings flanking the main entrance. The elders themselves are not extremely difficult if you're prepared with strong armor and weapons, since they move and attack relatively slowly, but finding them within the maze can pose a challenge. It might help to wall off dead ends as you investigate them, and note that the wings are connected by a long hallway around the back of the monument that bypasses the maze.

After that is done you can simply take the sea lanterns, sponges, prismarine, and gold and leave if you want. Or turn it into a base or a guardian farm. Now that Mining Fatigue is no longer an issue, you can use any method you'd like to accomplish this. If you were lucky enough to find a sponge room (or three), the sponges will be particularly helpful in this task, as the sponges will soak up a lot of the water. Even if you did not find a sponge room, you can use the sponges from the elder guardians, or previously-obtained sponges from other monuments.