Note: This tutorial should take around 1 to 1.5 hours to complete.

There are some things that you should not do before creating a resource pack. Here is a list of "don'ts":

Start off by navigating to your resourcepacks folder. To find the folder, you must first locate the Minecraft folder. Once you are in the resource pack folder, create a new folder and name it: "Tutorial_Resource_Pack". Then, open that folder.

The first thing we need to do is create a pack.mcmeta file. This lets Minecraft know that the folder is a resource pack and it also allows you to customize the description that appears when you're selecting which resource pack to use in the game.

To create an MCMETA file, right click in the 'Tutorial_Resource_Pack' folder and create a new text document. Name this file "pack.mcmeta".

Make sure the file extension is .mcmeta and not .txt when you rename it. You may be warned that changing a file name extension could make the file unusable. This is okay!

If you can't see file extensions, you can turn them on by going to the View menu of the file explorer and checking the check box for file name extensions.

Open pack.mcmeta in a text editor of your choice and copy or type the following:

If you are using an older version, you'll need to replace the 5 after "pack_format" depending on your version.

(In pack format 3 and higher (1.11 and higher) all of the file names in the resource pack should have small letters only)

You can leave the description or you can change it to something more exciting. If you decide you need something with fancy characters, you can look up the code for it here. Say you want to use the letter thorn: Þ. You'd put that in as \u00DE. Just make sure you use a backslash and not a forward slash. (Only the characters 0000-FFFF (BMP) are supported in Minecraft)

This file is written in JSON! We won't go into specifics about the format now, but be aware about how things are laid out. Be very careful not to forget quotation marks, colons, and curly or square brackets. Missing one of these can lead to your resource pack not working correctly!

Now we are ready to test it out in game! Launch Minecraft and open the options, then click on Resource Packs. Your game should look something like this if you used the above code: 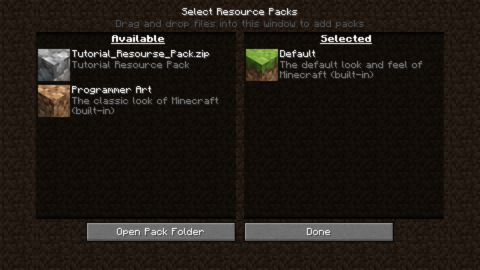 If an icon is not specified, a cobblestone icon will show up next to the pack. Any image can be used here, as long as it is called pack.png. The pack.png file must be 64 x 64 pixels for your custom image to render properly.

Now that we have our resource pack set up, let's modify the creeper's texture!

However, before we can do some painting, we need to set up the folder structure that Minecraft expects resource packs to be in. To do this, do the following:

Now that we have the normal creeper texture, open it up in the image editor of your choice. It should look something like this: 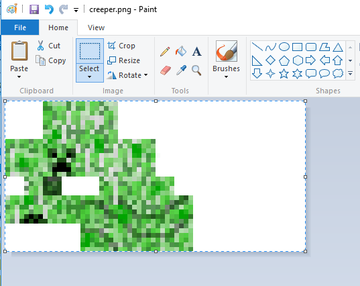 You might notice your texture looking small, make sure to zoom in on the texture. In MS Paint you can control magnification in the bottom right hand corner of the window with the slider. 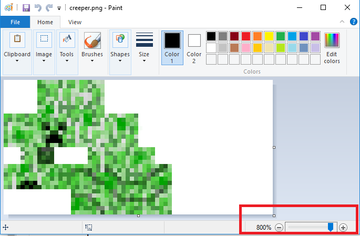 A quick note on textures

If you've never seen a texture before, the above image might surprise you. The best way to think about it is like wrapping a gift with wrapping paper, but instead our wrapping paper is our texture. Here is how the creeper's texture is laid out:

Areas with matching colors face the same direction (i.e. Red areas are always the front of a cube).

How this looks in game:

Now it's time to be creative! Edit the creeper however you want. I'm just going to add a headband for sake of simplicity. 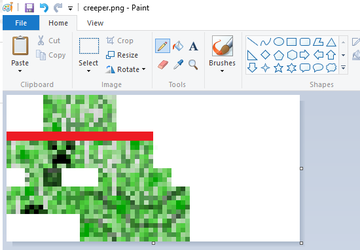 Once you are happy with your texture, save out the file as a .png and make sure that the file name is "creeper". The game will only look for files with the correct name.

Sometimes you may want to change one of the Minecraft models. Here is a quick and easy way on how to do it.

Because the default ladder in Minecraft isn't 3D, you can replace it with your own model. First, get all the ladder's files into this resource pack:

In modeling the ladder, we will use the recommended Blockbench. To open it, simply double-click it. After it has opened, press Ctrl+O to open the ladder model. After the open dialog has appeared, go to the location where you saved it and double click.

You then should be facing a ladder which is on the south side of the box.

Now we have created the particle texture of the block when broken and the main texture.

When you have completed the 3D model of the ladder and saved it, launch Minecraft, and test it out. Place a ladder on a wall, and you should see its replaced model.

You can change or add new music using a resource pack.

In this example, you will learn how to change the boss music in the ender dragon fight.

If everything went according to plan, you have now replaced a sound in Minecraft. To test it:

Finding the location of the sounds[edit]

In order to add a sound, you'll need to know where it should actually go by determining its path. Unlike replacing sounds, you will go straight to your resource pack folder and search in there.

Adding the folders and sound in your resource pack[edit]

Because we are adding a sound, we must define where it will be used in sounds.json.

If everything went according to plan, you have now added a sound in Minecraft. To test it:

You can add new languages to Minecraft using a resource pack. Assume your language code is 'LANG'[1] and country/region code is 'COUNTRY',[2] pack.mcmeta will look like:

If you want your language to be right-to-left, set "bidirectional" to true.

An example of an animation file is this:

All you really need to make a texture animated is the following code. By default, it will make each frame last only one tick:

Save the file as the same name as the texture you want animated with an .mcmeta in the same folder as your texture.

An example of a texture property is this:

Character sizes in fonts are determined by the last line of pixels that contains pixels which contain a non-zero alpha. This allows additional padding to be added around characters by adding a color with an alpha level of 1, which Minecraft will consider as part of the character.

If you are the owner of a server, you may set it as the resource pack of your server.

Servers can have an icon that will show up in the Multiplayer list.