For new players on Minecraft, fending off monsters and harvesting materials can already be a very painful and confusing job. This tutorial will help you construct some of the most useful as well as some of the most impressive buildings available to Minecraft.

A basic house is anything from a 5×5 square to a castle the size of a Minecraft world. They can be made of any material, in any biome, anywhere.

You can make a cubed house which is a shelter when you come back from mining, for example.

This is the best choice if you want to create a permanent base. This consists of a large fortified wall with an overhang to keep spiders out, as well as a wet/dry moat (optional). This will surround your entire settlement. This means your farms, houses and any other buildings you have. You may also wish to build a secondary fortification inside as well as a real-world castle (see topic below), just in case of a breach. In addition, you will want to build guard towers in each corner of the compound. This is to help keep your walls clean of mobs. These towers, if possible, should protrude from the corners so that you can clearly see and shoot anything near your wall. Be able to do this for the entire length of the wall to the next corner, or minimally to the halfway point between the two towers. This type of building is recommended for a player with large amounts of resources at their disposal.

Essentially the cube, except it has battlements containing (imaginary) snipers and cannons. One of the major differences between the castle and the cube is that the castle is supposed to actually look good. To make it look good you can extend out your cube and add blocks or slabs on every second block.

The cobblestone can be replaced with any block.

Build this on all 6 sides of your castle using cobblestone, wood, or both!

A half-buried structure, it has the conveniences of underground shelters with the provision for windows which double as above-ground firing ports. You enter from the top, which has a trapdoor.

Also, iron doors or trapdoors are a good choice when keeping the hordes out, or even better an underground system of tunnels connecting to multiple pillboxes or a base.

A basic house that is built on flat land and is completely open. These houses are easy to spot and maybe multiple floors. On average, these houses use anywhere between 2 and 10 stacks of materials.

Instead of having to build a house, use what Minecraft provides you, and build your house in a cave or other naturally-generated structure. They use minimal resources but may cost a significant number of pickaxes. They are hard to see, and a landmark is recommended. It is also helpful to acquire useful items like stone, iron, and coal while you're digging out an area for your house.

A house that is a part-free-standing house, and part-cave. An ideal combination of both worlds. The pickaxes are used here to gather materials for the main house while making more room underground.

These houses are basically a large point leading up to a crazy height. They offer excellent views, and are quite creeper-resistant, especially if the bottom few layers are made of obsidian. However, they are very hard to expand, cost extremely high amounts of materials, and are rather monotonous to ascend. Building an elevator, preferably a two-way design, would solve the third problem.

If you find an NPC Village, you can make your home in a villager's house! These are ready-generated houses handy for you to use, and expansion can be done with the help of a few spare materials.

Please note that if you are not on peaceful mode, you may cause a zombie siege.

A simple and good-looking house can be made by making 4-to-5-block-high pillars arranged in a square or rectangle. These pillars can be made of cobblestone. Join them at the top with cobblestone beams. Then fill in the gaps with wooden planks. You can also add windows. To make a roof cover the top and place wooden stairs on it, arranged in a pitched fashion. Logs and white stained clay (or wool) can be used instead to make a Tudor house.

This is a type of building under the ground, like a bombing shelter or nuke shelter. This is for a more hidden type of shelter under the ground/ocean and makes a nonpublic safe house. They may be hard to find, so create a landmark to let you know it's there. It is safer than a shelter above ground. Advantages are no one/thing can find you, and you are more protected. You can also use it as a point where you can have a mine. Disadvantages are you can't have windows, so you have to actually exit your shelter to see outside (or make a hole in the ground to see outside) and the fact that every expansion requires a pickaxe. Also, if you break a hole and there's lava or water, you are stuck and you are very likely to die.

Casting and molding are slightly different than other methods. For molding, one uses dirt or cobblestone or another cheap, non-flammable material to fill in all the blocks they want hollow. Then, they fill it in with lava, wait for it to settle, cover the source block, cover in water, and, lastly, break the dirt.

Casting means one fills layer by layer with lava source blocks and pours water over them, turning it into obsidian. It is very difficult as one needs a diamond pickaxe for mistakes and large amounts of buckets for effective transport of water and/or lava, not to mention the high danger of working with lava. For a large amount of lava needed, it is advisable to either find one or more lava lakes or to go to the Nether. (more to come)

For something new, try lava on a tree, then just add water when it seems right to you.

This is basically any type of house built in the Nether. It is highly recommended that you make it out of a blast-resistant block, such as cobblestone or nether brick. If you don't have much resources, use some warped stems, crimson stems, and/or blackstone.

A simple way to mark a spot, if it is next a mountain‌[Java Edition only] or extreme-hills‌[Bedrock Edition only] biome, is to put some torches on the top. You can also add lava on them.

Statues, especially big ones, can be used to indicate a certain spot.

Beacons/Pillars can be used to mark where your house/favorite mine is.

You could also use a beacon block, but these are expensive to make and cannot be crafted early in the game.

Navigational towers and lighthouses can be created to help you find your way home after a trip to say, the beach. You'll need enough of some kind of block to make a tower of your desired height, a light source, and enough ladders to climb that tower. 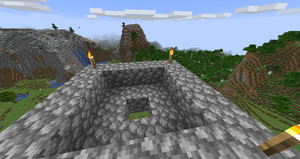 A navigational tower, or lighthouse, made with cobblestone and lit with torches.

Another useful landmark tool is a lava pillar. Though slightly more costly than a lighthouse, it can be spotted much more easily, during the day or night. To build one, you need one bucket of lava, and enough materials to build one pillar of your desired height.

You can also find your way home with burning netherrack piles. Just put a lot of netherrack on a hill or a mountain, and set the whole thing on fire. Once trees and grass burn down, it can become quite easy to see houses.

To do this, you require item frames, and the items you intend to use to indicate such a structure.

For example, you can designate a mine by building a pillar and putting a pickaxe on the item frames on all four sides of the pillar.

Farms are ways of getting renewable resources in a relatively time-efficient manner. See the item and mob farming tutorials for more information.