There are many different designs, but they are all based on the same general idea: a comparator is turned on while it should be turned off, or the other way around. To get a comparator in such a state, the player have to make sure that it doesn't realize that it should change. This can be done in several ways.

The CUD switch detects everything a BUD detects, however the CUD can detect updates from the following blocks 2 blocks away from the comparator horizontally (but only if a solid block exists between the comparator and the target block). This means that the player can have a CUD behind a wall that detects the following updates in front of the wall:

Note: If a chest is placed beyond a block next to a CUD switch, only placing and removal is detected. (Tested with Cauldron CUD switch)

This method uses the mechanics of a chest. When a chest is locked, the comparator doesn't realize that it shouldn't be turned on anymore. When the player updated the comparator, it realizes, and resets the system.

It's also possible to block the chest with an ocelot. When ocelot sits on a chest, the player can't open it. The player can move them using pistons, minecarts or water. Using minecarts, players can make a silent CUD, besides the meow-sound of the ocelot or cat. 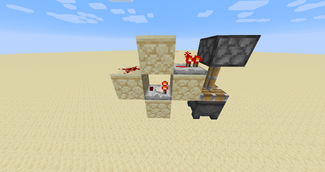 A cauldron based CUD. 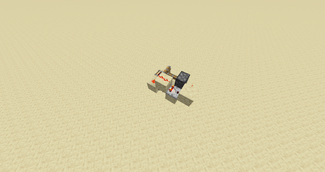 A redirecting based CUD. The redstone is redirected by a detector rail. Note that the lever should always be turned on.

This method is often used in BUD's. The player can turn any repeater-based BUD into a CUD by replacing the repeater with a comparator. They can redirect redstone with a detector rail, redstone block or a solid block, blocking 2 redstone diagonal to each other. Again, the comparator doesn't realize that the redstone isn't pointing the right direction anymore and it will stay turned on until it receives an update. 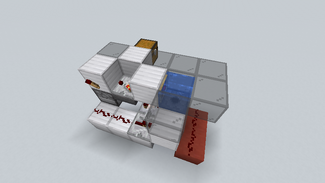 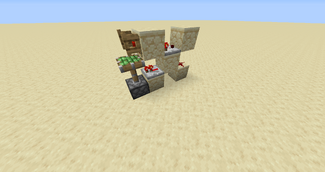 Comparators can take a redstone output from an item frame, but only if the item frame's position isn't occupied by a block. Many blocks will break the item frame, if they are in the same position, but some blocks don't. Examples are water, fence gates, skulls and flowers.

Other devices can be built using the same underlying principle as the CUD switch. CUDs can be made stackable and even tile-able. They can be turned into a toggle-CUD. CUDs can be made pistonless using ocelots.

Why and how it works[edit]

The earliest known CUD-switch was made by RedsMiners.[1] The bug it was based on has been fixed in 1.5.

DvirWi found out that it can detect the clicking inside of chests.[2]

Short time later, NiceMarkMC made a version that used DvirWi's technique, despite not knowing it was a CUD.[3]

Redstone Sheep then found out that it would detect most block entity changes and had a chat with NiceMarkMC, giving it the name Tile Entity Data Update Detector (TEDUD).[4]

NiceMarkMC then uploaded a video of DvirWi's version and called it Tile Entity Update Detector (TEUD) to keep it shorter, and viewers suggested calling it Data Update Detector (DUD) which became a widely used name.

NiceMarkMC accepted the name DUD, but then renamed it to CUD because the other names were technically incorrect.

In Java Edition 1.13 (17w47a), CUDs can no longer detect note blocks, since it is no longer a block entity.