This page would benefit from the addition of more images.
Please remove this notice once you've added suitable images to the article.

A cruise ship is a ship that can be built in Minecraft. This page shows a step-to-step guide how to build one.

Large cruise ships are usually very large and complex, and therefore may be quite difficult and tedious to build. It is recommended to build these in Creative mode, as a very large number of resources, some of which may be hard to acquire in Survival or Adventure, are usually needed to create a large cruise ship.

Video of the Oasis of the Seas cruise ship built in the game.
See § Tutorial Videos for more videos.

A video of the construction of the Carnival Breeze, which could be considered a medium-large cruise ship.

Passenger ferries can be built in water bodies between two land masses, where the distance between the masses is not small but not significantly large either (e.g. a large lake, but not a river or an ocean). The size of a passenger ferry varies, such as a steamboat. the boat advised to create depends upon the number of passengers expected and/or the distance between the two lands.

If a huge cruise ship is not what you're looking for, you can build a river cruise boat, which is a smaller ship designed for traveling through rivers. These boats are usually two decks or lower and not very long either. You could build this on top of a naturally generated river, or you could dig your own river and build your boat on that.

Strongly recommended while building a cruise ship, it can include a check in desk, toilets, playing area, cafe, walkway to the ship, and optionally staircases and/or lifts with more than two levels.

Create a platform of planks, add fences from floor of water body to platform corners.

make a door level to a dock or station

place a line of a move-able block on front and top of slime block line.

attach a slime block to the available piston.

create a staircase starting on top of the slime block.

place 1 slime block underneath each stair. 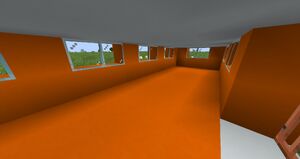 The interior of a player-made lifeboat

All ships have lifeboats. Depending on the size of the vessel, you may have many or only a few lifeboats. Real-life lifeboats are colored orange, so they could be easily spotted by rescue crews, so you should use orange material to build the lifeboats.

Below are some tutorial videos from YouTube, sorted partly from 1-30, click "Show" to view those, and clicking "Show" will view all videos, but them are collapsed to prevent them loading or crashing this page. Click "Show" on a specific video to view it.