This page seeks to teach you how to clone items and blocks without building a separate farm for them, in vanilla Survival mode. It can be treated as an "everything farm," since it can "farm" things that can't normally be farmed, like diamonds, dragon eggs and other non-renewable blocks.

The best way to duplicate a block is to turn it into an item first, then duplicate the item. However, there are other ways to duplicate the blocks themselves, though they only work for certain blocks. Shulker boxes make item duplication much easier because they allow for up to 1,729 items to be cloned at once (including the shulker box).

Duplicating items and blocks can be very useful. For example, let's say you wanted to obtain enormous amounts of glass or sand. Going into a desert and mining it yourself is extremely time-consuming, so a sand duplicator can be very useful.

If you wanted to break a lot of bedrock using this technique, the player can build a dragon egg duplicator to create more dragon eggs. (Dragon Egg Bedrock removing is fixed in newer versions, the Dragon Egg becomes decorational)

This method is a simple method and has been around since the beginning of the Alpha stage. This method involves dropping the items you want to dupe, and then saving and quitting. You would then reload the world, pick up the items and press Alt + F4 about 5 seconds later (on Windows). Then relaunch the game and reload the world. The items should be duplicated.

Deadly Method (Patched in 1.15 and in spigot)[edit]

This method is extremely deadly, but not necessarily to the player. This method involves taking a mob that can carry items (e.g. a zombie, a donkey or a llama) down to very low health (i.e. half a heart or less). Using extremely precise timing, kill that mob as it travels through an end portal. The items equipped and the mob should appear in the other dimension. It works by tricking the game into thinking the mob is alive on one end of the portal and dead on the other side. The live mob will travel through the portal still carrying the items, and the dead mob's items are also sent into the portal, allowing the player at the other end to collect the cloned items and the mob carrying them.

This method exploits the fact that zombies can transform into drowned while they are dying. If you coax a zombie to pick up an item by throwing one at it and then kill it right at the moment that it converts to a drowned, the zombie will die and drop what it was holding but the newly spawned drowned will be holding a duplicate of the item. This can also work with husks transforming into zombies.

When you overflow chunk memory, you will be able to freeze chunk. What this means is that changes on this chunk will not be saved and after loading it again it will return to the previous state. The best way to do this is to create books filled with about fifty pages of random Unicode characters and put it in a chest. There are mods for doing this automatically, but you can also do it manually by copying and pasting. You will need two different types of books for this to work.

0. Choose a chunk in which you want to duplicate and do everything only in this chunk(Press F3 + G to see chunk borders).

2. Place a chest and put the items you want to duplicate inside it.

3. Place a chest at the same chunk and put them in this pattern:

5. Reload chunk by reconnecting to the world(if you are on singleplayer) or going 200-300 blocks away and returning(if you are on multiplayer)

7. Take out the items you wanted to duplicate into your inventory or put them in a chest at the other chunk.

9. Now you have your item(s) in the chest and in your inventory. Books in a second chest are just like in [4].

2) Place a barrel in the chunk that you want to duplicate. Then, place a chest above it.

3) Then, put the items that you wanted to duplicate in the barrel.

4) After that, put 25 book and quills that filled in with 100 pages of random unicode characters in the chest like this.

7) Open the chest and move the books like this:

8) Took your items away from the barrel and move them to your inventory or put them in a barrel at the other chunk.

9) Then, re-logging your world (If you're in singleplayer) or walk back to the chunk again (If you're in multiplayer). Then, your items will reappeared in barrel and the books will reverted into this pattern in the chest above the barrel:

10) That means your items are duplicated.

There are numerous timing-related ways to duplicate items. Most of these are only possible in singleplayer since you have the ability to pause the game and log out at any time.

When you drop items and then relog at exactly the same time that you pick them up, you can duplicate what you dropped.

When an item frame is removed (broken by the player) from the rear of a piston as the piston is retracting, the correct timing will yield two items of the item that was within the frame. This will work with any blocks or items inside of the frame, with shulker boxes being able to duplicate multiple items at once. This method works in both singleplayer and multiplayer game modes.

This requires a multiplayer or LAN server. There are three variations to this method. (patched)

There is a way to trick the game into logging in the same player twice on one server. To do this, start two instances of Minecraft. This requires starting a new instance of the Launcher so that they don’t interfere with each other. Log them both on the same server at the same time. By doing this, the game will render two of the same player. You can then kill the copied player and double your inventory. Rarely servers may also duplicate players on accident or leave "ghosts" of logged out players which can be killed for the same effect.

This can be accomplished by moving rails or carpet in such a way that it is both pushed and dropped as an item. This happens because before pushing, the piston creates a list of the blocks it is about to push. Then, the blocks underneath the rails/carpet are moved first, causing the rails/carpet to pop off as items; then the piston moves the rails/carpet from the list of blocks it created previously, placing the rails/carpet in the world. This is somewhat patched, but carpet can still be reliably duplicated. As of 1.15.2, carpets can be placed on dead coral fans. If the dead coral fan is attached to the side of a slime block, and a second slime block is above the first, and the carpet is placed on the dead coral, pulling the pair of slime blocks causes the carpet to drop as an item while remaining on top of the coral. Since carpets can be used for fuel, rapidly duplicating them is somewhat useful.

TNT duplication works in a similar way as rail duplication. A TNT block is BUD-powered, such that when the contraption is pushed by a piston, the TNT is updated and ignites into a primed TNT entity. Then, the piston moves the TNT from the list of TNT block left.

There are many ways to do this, but the basic idea is the same.

A gravity-affected block is pushed toward an end portal. It becomes an entity as it falls into the portal, and it travels into the other dimension's "spawn point.", but before it's removed from the original dimension, it bounces off an entity in the portal (in a vehicle so it won't go through), and is caught by some pistons. It then turns into a block and is returned to its original location. This process can be looped using redstone. It works for any block that is affected by gravity, except for primed TNT because it would blow up the contraption.

Dirt duplication relies on the crafting recipe for coarse dirt. Coarse dirt is crafted with 2 dirt blocks and 2 gravel blocks and the player gets 4 coarse dirt from it. If the player hoes the coarse dirt, it becomes normal dirt. Some of this new dirt created can go into crafting more coarse dirt. You can continue this process infinitely, as long as you built a gravel duplicator using the method above.

Bring an animal to the end, put a lead on it, and then lead it into the end portal. When you get back, it should have dropped two leads. Sometimes one of the leads ends up in the end, so make sure to check there. This also works when bringing animals into the end.

When a chest is pushed by a piston, the contents are backed up a split second before it is moved. If you are in the chest interface and quick-move an item to your inventory in that moment then you will receive the item and the chest will be moved with the item still in it as well. 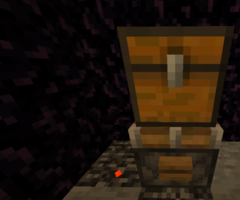 The "simple" method of the piston dupe machine. It follows the same instructions as the more expensive, recommended method but uses less blocks.

If done correctly, you should have an identical copy of the item you put in.

(Duplicates some Stackable Items only)

This video will explain how to duplicate any ore using a dispenser and a redstone clock.

Due to how beds are made out of 2 blocks, an explosion near the bed can make the bed drop 2 bed items, meaning you can spawn 2 beds (4 bed blocks) when you had 1 (2 bed blocks). You can repeat this and get infinite beds.

Get an anvil and get either 9 iron ingot, 9 diamond, 9 coal, 9 gold ingot, 9 lapis lazuli, 9 redstone dust or 9 emerald. rename 1 of the ores to something random, place it above the rest of the ores in your inventory and go to a crafting table. go to craft a block of that ore and select 'craft all' you will have 1 block of (whatever you chose) and the other 8 will still be in your inventory.

This video will explain how to duplicate any gravity-affected block.

To use the following methods, you will have to either not update past that point or revert to a previous update (if possible for your system, not all can, such as on Xbox One or Nintendo Switch).

Patched in 1.5.3, by removing the "Take Half" option from the Anvil output options.

When naming a stack of items in an anvil, you can use the "Take Half" option to receive the output items without depleting the original stack. As long as you do not take the final re-named item, you can go to the original stack and pick it up to start more or just leave the anvil interface if you are done.

Items duplicated this way won't work for quick use in a recipe, though certainly can be used for Classic crafting and any other use. However, if you wish to revert an item to the default name, you can do so by crafting it into another item then crafting it back to the original (such as redstone block -> redstone dust x9 -> redstone block), or by placing it as a block then breaking it back into an item.