It has been suggested that this page be split into Arithmetic logic, Passcode locks, and Base changers. Do not split pages until a consensus has been reached. [discuss]
Reason: There's already a tutorials section for this and it has become a disorganized mess. The pages above are only a suggestion.

In Minecraft, several in-game systems can usefully perform information processing. The systems include water, sand, minecarts, pistons, and redstone. Of all these systems, only redstone was specifically added for its ability to manipulate information, in the form of redstone signals.

Redstone, like electricity, has high reliability and high switching-speeds, which has seen it overtake the other mechanical systems as the high-tech of Minecraft, just as electricity overtook the various mechanics such as pneumatics to become the high-tech of our world.

In both modern digital electronics and redstone engineering, the construction of complex information processing elements is simplified using multiple layers of abstraction.

The first layer is that of atomic components; redstone/redstone torches/repeaters/blocks, pistons, buttons, levers and pressure plates are all capable of affecting redstone signals.

The second layer is binary logic gates; these are composite devices, possessing a very limited internal state and usually operating on between one and three bits.

The third layer is high-level components, made by combining logic gates. These devices operate on patterns of bits, often abstracting them into a more humanly comprehensible encoding like natural numbers. Such devices include mathematical adders, combination locks, memory-registers, etc.

In the fourth and final layer, a key set of components are combined to create functional computer systems which can process any arbitrary data, often without user oversight. 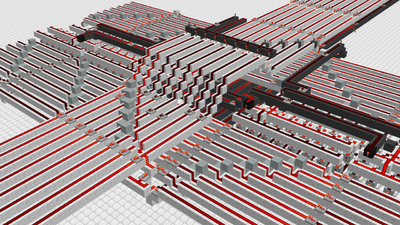 These circuits simply convert inputs of a given format to another format. Converters include Binary to BCD, Binary to Octal, Binary to Hex, BCD to 7-Segment, etc.

You can understand this design as a combination of AND gates.

Demultiplexer is a circuit that uses the following logic:

The most obvious way to implement a demultiplexer would be to put a whole bunch of logic gates and connect them together, but even with 3 or 4 bits it turns into a mess.

If you look at the binary numbers table, you can notice a pattern.

Therefore, we should make a circuit that looks like this:

We can easily implement this using 3 "punch cards" that consist of solid blocks and air. The "punch cards" or the masks are being moved by pistons with slime blocks.

So the signal is only being propagated if all three layers of masks align in a specific way.

Open the picture to see the layers.

As you can see, this system is very compact and comprehensible.

You can use this in reverse as well (not as a multiplexer, but if you reverse the repeaters the signal from every ex-outptut (0–7) will only propagate if it matches the current state of the demultiplexer, so it works like "Output3 = (Input3) AND (Demux=011)").

A series of gates that converts a 3-bit binary input to a single active line out of many. They are useful in many ways as they are compact, 5×5×3 at the largest.

As there are many lines combined using implicit-ORs, you have to place diodes before each input into a circuit to keep signals from feeding back into other inputs.

A series of gates that converts a 4-bit binary input to a single active line out of many (e.g. 0-9 if the input is decimal or 0-F if the input is hexadecimal). They are useful in many ways as they are compact, 3×5×2 at the largest.

As there are many lines combined using implicit-ORs, you have to place diodes before each input into a circuit to keep signals from feeding back into other inputs.

You also can convert a 1-of-16 signal to a 4-bit binary number. You only need 4 OR gates, with 8 inputs each. These have to be isolating ORs to prevent signals from feeding back into other inputs.

For every output line, make an OR gate with the inputs wired to the input lines where there is a '1' in the table below. 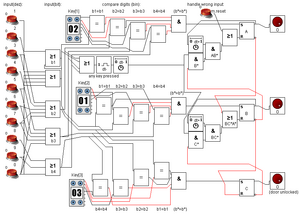 Logic for a 3-digit key log, with digits 0-9. It's order-sensitive

In the following we'll use (0)16 = (1111)2. And for [1,9] the MUX-table upon. So the key uses decimal digits. Therefore, we have to mux the used buttons to binary data. Here look through the first two columns. The first represents the input-digit in (hexa)decimal, the second represents the input-digit in binary code. Here you can add also buttons for [A,E], but I disclaimed them preferring a better arranging. The /b1\-box outputs the first bit, the /b2\-box the second, and so on.

Now we have to make sure, that the state will be erased, if the following digit is wrong. Therefore, we handle a key-press-event (--/b1 OR b2 OR b3 OR b4\--/dt-\--/dt-\--). Search the diagram for the three blocks near "dt-". Here we look, if any key is pressed, and we forward the event with a minor delay. For resetting /A\, if the second digit is wrong, we combine (key pressed) & (not B). It means: any key is pressed and the second digit of the key is entered false. Therewith /A\ will be not reset, if we enter the first digit, /A\ only should be reset, if /A\ is already active. So we combine (B* & A) =: (AB*). /AB*\ now resets the memory-cell /A\, if the second digit is entered false and the first key has been already entered. The major delay /dt+\ must be used, because /A\ resets itself, if we press the digit-button too long. To prevent this failure for a little bit, we use the delay /dt+\. The OR after /AB*\ is used, for manually resetting, i.e. by a pressure plate.

Now we copy the whole reset-circuit for Key[2]. The only changes are, that the manually reset comes from (not A) and the auto-reset (wrong digit after), comes from (C). The manual reset from A prevents B to be activated, if the first digit is not entered. So this line makes sure, that our key is order-sensitive.

The question is, why we use the minor-delay-blocks /dt-\. Visualize /A\ is on. Now we enter a correct second digit. So B will be on, and (not B) is off. But while (not B) is still on, the key-pressed-event is working yet, so A will be reset, but it shouldn't. With the /dt-\-blocks, we give /B\ the chance to act, before key-pressed-event is activated.

For /C\ the reset-event is only the manual-reset-line, from B. So it is prevented to be activated, before /B\ is true. And it will be deactivated, when a pressure-plate resets /A\ and /B\.

Not really a con: in this circuit the following happens with maybe the code 311: 3 pressed, A activated; 1 pressed, B activated, C activated. To prevent this, only set a delay with a repeater between (not A) and (reset B). So the following won't be activated with the actual digit.

If you fix this, the circuit will have the following skill, depending on key-length. ( digit = 2n-1, possibilities: digitLength )

Combination locks are a type of redstone circuit. They generally have a number of components which must be set in the right combination in order to activate something such as a door. Combination locks can be very useful in creating adventure maps. Note that if you are playing in survival multiplayer, other players will still be able to break into the mechanism and cause it to activate without knowing the password.

Timers can detect the time difference between the first input and the second.

A timer. The extra repeater at the bottom is to compensate for the delay of the upper repeaters.
Example of a timer in action. This one determines the time difference between the input and output of a 2-tick repeater.

The repeaters that will lock can be set to different delays. For example, if they are set to 4 ticks and the first 3 are active, it means the time difference was 0.8-1.2 seconds. You can even have a mix, which can be handy if you know what the range is likely to be. However, you will need to be careful when reading these timers.

If you are measuring higher scales, the second signal might not reach all of the repeaters. You will need repeaters to replenish the signal.

A section of the timer that replenishes the signal. Since the upper repeater has a delay, another repeater is required in the lower section.

If the signals are short times (like if you are using observers), you may not have time to read the data.

An input modifier. When the inputs are applied, the timer will treat them as active until the button is pressed.

You can also measure how long a signal lasts.

A timer that measures the duration of a stone button.

Please note the following when making a duration timer:

D flip-flop is an electronic component that allows you to change its output according to the clock. It's and RS NOR latch that sets its value to the D input when the ">" (clock) input is changing its state from low to high (in some cases from high to low).

Basically, it's equivalent to the expression: "Set the output Q to the input D when the input C goes from 0 to 1".

For example, you can use D flip-flops to shift the value from left to right. 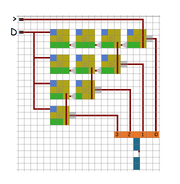 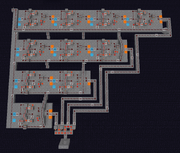 In this lock, the > signal propagates from the rightmost flip-flop to the leftmost, so the signal shifts to the right. This circuit allows you to input a 4-bit number with two levers. You can use any number of bits, but this configuration is already pretty secure even if someone figures out what a lock it is.

In theory, you can program the lock from this serial interface as well. Just attach 4 RS NOR latches and a hidden place for the programming levers.

This design is not very practical as a lock, but might be a nice feature on something like a puzzle challenge map.