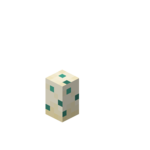 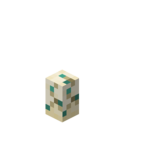 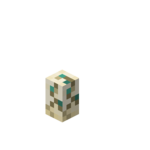 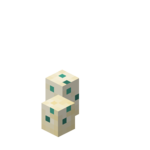 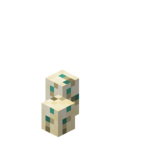 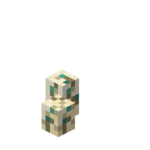 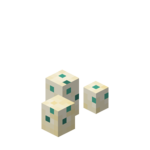 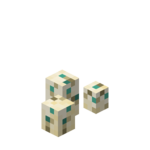 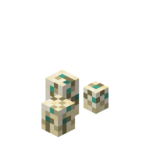 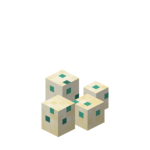 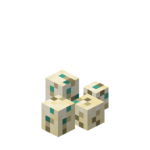 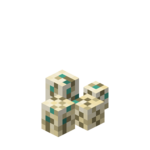 Not to be confused with Turtle Spawn Egg.

A turtle egg[a] is a block that hatches one or more baby turtles.

Turtle eggs can be obtained in the inventory using tools with the Silk Touch enchantment. If broken without the enchantment, pushed by a piston, a gravity-affected block falls into its space, or a player or item falls onto it from a higher block, the egg breaks without dropping anything.

After two turtles are bred with seagrass, one of them travels back to its home beach, digs in the sand, and lays an egg block that contains 1–4 eggs after several seconds. The egg goes through three stages before hatching. Hatching occurs only when the egg is placed on regular sand or red sand. The time until hatching typically takes several day cycles. The eggs mature and hatch during both day and night, but grow faster at night.

Turtle eggs hatch on sand and red sand. They hatch significantly faster at nighttime. Beginning at sundown they have a chance to hatch throughout the night increasing in percentages significantly at or after 3/4 of the night completed. Eggs do not appear to progress toward hatching if the player is not awake or not within 50+ blocks so the chunk in which the eggs are in can load.

The more cracks the egg has, the closer it is to hatching.

If a player or large-enough mob, armor stand, or falling block falls or stands on an egg for a certain amount of time, the egg breaks. As long as the entity remains on the egg block, the eggs break one at a time until all eggs in the block are destroyed.

Zombies and their variants seek out and trample turtle eggs that have 2 blocks of air above them, breaking egg after egg on the block until all of them have been destroyed, unless mobGriefing is false. The range of detection is a taxicab distance of 23 blocks away horizontally and 3 blocks vertically (counted from the block the mob is standing on) on Java Edition. The detection range is 10 blocks away horizontally and 2 blocks vertically on Bedrock Edition. When a player in Survival or Adventure Game-mode is nearby, the zombie prefers to attack the player rather than trampling the turtle egg.

Eggs do not require a supporting block and are capable of supporting lanterns hanging under them.[1]

Issues relating to "Turtle Egg" are maintained on the bug tracker. Report issues there.