From Minecraft Wiki
< Trading(Redirected from Trading/Before Village and Pillage)
Jump to: navigation, search

In Village & Pillage, trading was significantly revamped. This page is about villager_v1 trading in Bedrock Edition, or before Java Edition 1.14 was released.

Pressing use on an adult villager would open a GUI allowing a player to trade with the villager. Villagers would make offers based on their profession and career, and would only make trades based on what offers they were making. Different offers could be viewed by pressing the left and right buttons next to the currently displayed offer. All offers involved emerald as a currency, and some item pertinent to the villager's career. 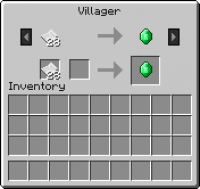 The old trading interface, displaying a trade of 28 paper for 1 emerald.

Careers were assigned to each villager as they spawned, with multiple careers being part of the same profession, and sharing textures. For example, brown-robed villagers could be fletchers or fishermen and blacksmiths could be armorers or weaponsmiths. These careers were viewable in the trading GUI, but the villager's level was not. Every villager spawned at tier 1 of their given career, which ranged from 2–4 initial unlocked trades (i.e. all shepherds spawned with only two options, buying wool and selling shears). Each tier consisted of a defined set of trade offers, and the tiers were the same for any given career (see the chart below). They could unlock new tiers when an existing offer was traded. Note that the trading GUI had to be closed before a villager would unlock a new tier. When they did, they would receive Regeneration I and become surrounded with purple and green particles for a few seconds. Each career had a fixed sequence of tiers, and would only unlock a finite number of offers.

An offer was guaranteed to reactivate available deactivated options (and unlock a tier, if some had not yet been unlocked) the first time it was traded. On subsequent trades, it would only have a 20% chance of doing so, per trade. For example, if a farmer villager had a trade of 8 pumpkins for 1 emerald, and the player traded a stack of 64 pumpkins, this would count as 8 attempts with each attempt having a 20% chance to reactivate the villager's trades, and come to about 83.2% chance of reactivation (1 - 1/0.88).

In Java Edition, all trades rewarded the player with 3–6 experience, or 8–11 experience if the villager was in a state where it is willing to breed. This was also true in Bedrock editions, except that certain trades didn't reward any experience: the first-tier trades of a Farmer, the rotten flesh trade of a Cleric, the porkchop trade of a Butcher, or the string trade of a Fletcher.

Fletcher (feather on hat and quiver)‌[Bedrock Edition only]

Librarian (eyeglasses with book as hat)‌[Bedrock Edition only]

Nitwits were generic green-robed or green coated‌[Bedrock Edition only]. They offered no trades.

Note: This stone mason trade table below only used in Bedrock Edition from villager which are not converted to villager_v2 (from template world)