From Minecraft Wiki
Jump to: navigation, search
For the mechanic used with piglins, see Bartering.

Villagers deactivate an offer after the offer has been used some times. The chance of an offer's deactivation is different for each item (see tables below). When villagers work at their job site blocks, they activate their offers again, up to twice per day. When an offer is disabled, a red "X" appears in the trading interface, and the villager displays the same particle effect as an offer being created. 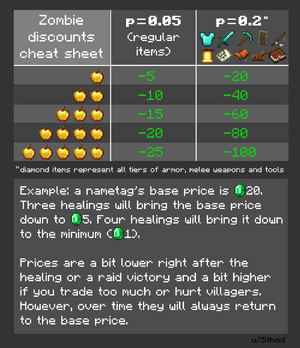 The price of an item rises and falls depending on three factors. Items with a high price multiplier (0.2) are affected by these changes more than items with a low multiplier (0.05). All price fluctuations affect only the first item involved in a trade: i.e. if you're selling 32 sticks for 1 emerald, it's possible to bring the price down to 1 stick or drive it up to 64 sticks, but you'll never get 2 emeralds from that trade. Additionally, no price can go lower than 1 or higher than the stack size.

This page would benefit from the addition of isometric renders.
Please remove this notice once you've added suitable isometric renders to the article.
The specific instructions are: emeralds above their heads