From Minecraft Wiki
(Redirected from Totems of undying)
Jump to: navigation, search
Totem of Undying 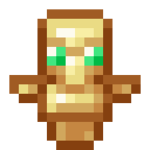 A totem of undying is an uncommon combat item that can save holders from death. It is dropped from evokers, which spawn in woodland mansions and raids.

Evokers always drop one totem of undying upon death. The drop rate is not affected by Looting.

Animation of the totem activating in Java Edition

Animation of the totem activating in Bedrock Edition

If the player is holding a totem of undying in their off-hand or main-hand slot and receives otherwise fatal damage, the totem prevents the player from dying. The totem of undying must be in the player's off-hand or main-hand for it to work — it does not work if it is in the hotbar, unless selected. The totem can be used only once; it disappears after use. It does not save the player from death caused by void damage or the /kill command.

When activated, the totem of undying restores 1

, removes all existing status effects, then grants 45 seconds of Regeneration II, 40 seconds of Fire Resistance II,‌[Bedrock Edition only]‌[upcoming: JE 1.16.2] and 5 seconds of Absorption II. An animation shows the totem of undying appearing to hover in front of the player's screen, similar to the animation seen when a player encounters an elder guardian. When killed by an Instant Damage tipped arrow, the arrow's instant damage takes effect after the totem has been activated.

The totem also works in hardcore mode, as well as hardcore multiplayer.

Issues relating to "Totem of Undying" are maintained on the bug tracker. Report issues there.