From Minecraft Wiki
(Redirected from The void)
Jump to: navigation, search

This article is about the empty space below the Minecraft world. For the fog that existed in the void in versions prior to Java Edition 1.8, see Void fog. For the invisible block obtainable only with commands, see Structure void. For the biome, see Superflat § Biome: The Void. 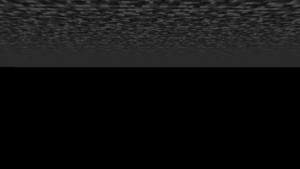 The void as shown beneath the Overworld.

The void is the name given to the empty space below the world in any dimension.

every half second, leading to the player's death in 2 1⁄2 seconds. Armor, totem of undying, resistance effect and the Protection enchantment does not protect the player from dying in the void, and death occurs at Y=-199.10. Other status effects can alter the death level slightly. After this, if no buttons are pressed, the player usually falls to death at somewhere below Y=-256, with this number varying on each death. It is possible to survive in the void, if the player constantly eats enchanted golden apples. However, the only way to have enough of them is to have a command block constantly giving them to the player. The player can also survive in the void by having regeneration of a sufficient level (achievable only by commands). If commands are used to make the player invincible or bestow infinite health, the player falls until Minecraft crashes. A player who falls into the void on a server with anti-flying measures is kicked out regardless of having a flying mod. Riding a vehicle into the void results in the player being stuck in the vehicle until death.

Liquids, such as water, cannot flow into the void.

The Void is red in the Nether, black in the overworld, and purple in the End.

Other entities may also fall through the void and receive the same damage as the player, with the exception of the wither, which appears to take tremendous damage. The ender dragon is completely immune to the void damage. All entities disappear at Y=-64. Any entity between layer Y=319 and Y=-64 appears as black. In the Overworld and in the Nether, a barrier layer of bedrock prevents the player from accessing the void. In the End, however, the void is easily accessible due to the large gaps between the islands.

In Bedrock Edition and Education Edition, the player's health is depleted by 4

every half second at any negative height. At Y=-40 an invisible barrier is erected, preventing the player from falling further. This barrier can be bypassed by using commands such as /tp. In Creative mode, one does not die, giving free access to flying under the void. A player who falls in the void in Creative eventually lands on an invisible barrier at Y=-40. However, if the player goes to any coordinates beyond negative or positive X or Z of 8,388,608 blocks, the invisible barrier disappears due to blocks of any kind no longer being solid to the player.

There is daylight according to the current time in the void of Bedrock Edition.

A wither summoned in the void will die after the 10 seconds of wither protection.

All entities except ender dragons and NPCs are damaged by the void.

Entering the bottom void is not possible in the Legacy Console Editions. Although the player is unable to break the bottom or top layer of bedrock, even in Creative, the player can enter it by breaking end stone in the end until reaching the void. As in Java Edition, the player takes 4

damage every half-seconds below Y=-64, and armor, a totem of undying and enchantments do not protect the player from dying. The player dies upon reaching zero health, and may respawn back to the overworld. Also, the player automatically jumps out of the vehicle at around Y=-46. If the player does somehow manage to access the void from the Overworld, falling into it results in the player standing on it. This also happens at the y-coordinate of 512, where an invisible barrier is erected to stop the player going any higher. The invisible barrier for the bottom is not present in the End. If the player is affected with Resistance 5+, Regeneration 8+ or Instant Health, the player can fall infinitely into the void without dying; however, this can be done only with the use of host privileges, mods or external editors, which may cause the player to become banned.

Additionally, black void fog exists. It increases with depth as the player descends past Y=17. As the player travels deeper, the fog at the edge of the render distance grows nearer, until the player reaches the deepest depths where visibility is reduced to just a few blocks, beyond which lies only blackness.

In the New Nintendo 3DS Edition, the player's health is depleted by 4

every half second at any negative height. A player who falls in Creative mode does not take damage. The player can fall past Y=-100000, and it is unknown if a limit exists. Saving, exiting and reloading the world returns the player to Y=-5.

There is daylight according to the current time of the void.

Note: This video is outdated, as void fog was removed in Java Edition 1.8.

Issues relating to "Void" are maintained on the bug tracker. Report issues there.