From Minecraft Wiki
(Redirected from The Nether Update)
Jump to: navigation, search

This article is about a major update that is themed around revamping the Nether. For the update that added the Nether to the game, see Halloween Update.

Official logo for the Nether Update. 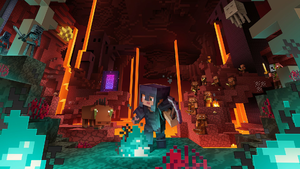 Official artwork released by Mojang for the Nether Update.

The Nether Update is a major update themed around revamping the Nether. It adds multiple new features to this dimension, such as new biomes and mobs. The update was announced at MINECON Live 2019[1] and was released on June 23, 2020, only for the Java and Bedrock editions of Minecraft.[2] It was released as Java Edition 1.16 and Bedrock Edition 1.16.0.[3][4]

This update's development on Bedrock Edition started with beta 1.15.0.51, which was released on February 12, 2020. Bedrock Edition 1.15.0 was skipped to bring parity between Java and Bedrock release versions.[5] 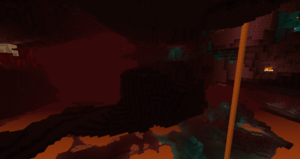 An example of the biomes in the Nether as of the update, with a crimson forest to the far left, nether wastes up close, warped forest on the back, and basalt deltas to the far right.

The original mix of Pigstep before converted to mono.