From Minecraft Wiki
(Redirected from Texture pack)
Jump to: navigation, search
This article is about the former mechanism used to customize the appearance of game elements. For asset customization in current versions of Minecraft, see Resource pack. For other uses, see Texture Pack (disambiguation).

This page describes content that exists only in outdated versions of Minecraft.
This feature used to be in the game but has since been removed. 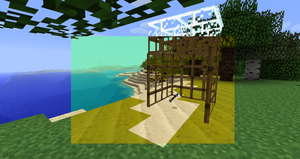 In Java Edition 1.6.1, texture packs were replaced with resource packs, which provide more control over textures and other game features, such as music and text. 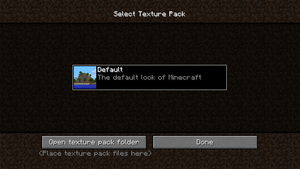 Texture packs load their assets based on the order of the packs on the list. The bottom-most pack loads first, then each pack placed above it replaces assets of the same name with its assets.

The root directory also contains an optional image called pack.png, which shows as the thumbnail for the pack on the texture pack selection menu.

Current versions of Minecraft support higher resolutions of texture packs. Traditionally, textures in-game work on a 16×16 block. Bigger texture packs can go all the way up to 512×512 (32×, 64×, 128×, 256×) but require better hardware to play smoothly.