From Minecraft Wiki
(Redirected from Texture)
Jump to: navigation, search

This article is about the system to customize assets since Java Edition 1.6.1. For other uses, see Texture pack (disambiguation). 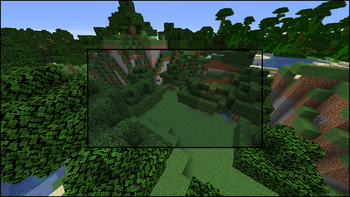 The resource pack system is an API which provides a way for players to customize textures, models, music, sounds, languages, the end poem, splashes, and fonts, without any code modification. 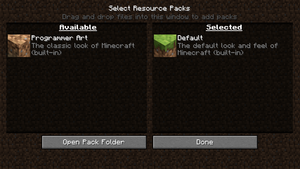 The default resource pack settings. as of Java Edition 1.14

Resource packs load their assets based on the order of the packs on the list. The bottom most pack loads first, then each pack placed above it replaces assets of the same name with its assets.

The old (pre-1.14) textures are available in a resource pack titled "Programmer Art".

Language files need to add only those lines that are actually changed by the pack. Any names that are not in the pack are loaded from the pack below, or default if no pack changes the names. 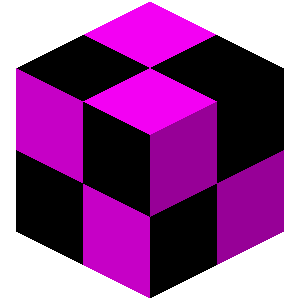 Colormaps are 256×256 pixel images which tell the game which color to use in each biome. They are located in assets/minecraft/textures/colormap. The game contains two colormaps, foliage.png which colors plants such as leaves (except birch and spruce) and vines, and grass.png which colors grass and grass blocks. Colormaps can be disabled on individual blocks by removing the tintindex tag.

The font file is located in assets/minecraft/textures/font/ascii.png

The font file used when displaying the enchanting "alien font" is assets/minecraft/textures/font/ascii_sga.png

The file splashes.txt contains lines of text separated using line breaks to determine the splashes to display in game. Any splash can be replaced with different text.

Minecraft generally does not store multiple different textures on sheets, and instead stores them on separate files. Two current exceptions are map icons[1] and experience orbs.[2]