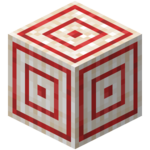 A target is a block that provides a temporary redstone charge when hit by a projectile. It is also preferentially "targeted" by redstone dust, making it a common circuitry component.

Targets emit a redstone signal when hit by most projectiles. This includes arrows, tridents, eggs, snowballs, splash potions, fire charges fired by a dispenser, firework rockets, lingering potions, bottles o' enchanting, ender pearls, and llama spit. The closer a projectile is to the center of the block, the stronger the redstone signal that is produced.

Target drops itself when broken with the correct tool if any is assigned. Refer to the Obtaining section for more info.

The strength of the signal depends on how close the projectile is to the center of the block, from 1 to 16.

The target also provides a block update when hit, meaning that an observer can detect if the target has been hit and has produced a redstone signal.

When used as part of a redstone circuit, target block has the unique property of being a opaque block that is not a mechanism component but still can redirect nearby redstone dust. A unique feature added in a recent snapshot allows the target block to redirect a redstone signal powering adjacent blocks only when the target itself is powered.

Issues relating to "Target" are maintained on the bug tracker. Report issues there.