OK, so I really just want to know if there's any way I can spawn a witch that's not hostile, I would try to figure out the command string for it myself, but I'm not that good at command strings. Brickticks (talk) 19:50, 18 February 2015 (UTC)

Do witches always drop potions when killed while drinking them or is it a chance-based drop?[edit]

The description is a little bit ambiguous and I cannot verify this myself since I don't know if I'm doing it right. I built a small machine that dispenses a water bucket over witches and splashes them with a Potion of Harming II, after which I slay them with an enchanted diamond sword under the Strength II potion effect, but I haven't gotten any Potion of Water Breathing drops yet. Papersphere (talk) 01:44, 24 May 2015 (UTC)

I was watching Kikoskia's hardcore let's play, and he several times ran into witches, well underground. (He'd mined down from the bottom of a ravine, broken into a different cave system, and saw witches. After killing them, he explored, and there were no open pits or anything they could have fallen from; the particular spawn was a small island in an ocean that took 3-4 minutes to cross by boat.) In his next series, while on the ground in a non-swamp biome not near a village, he had two witches spawn at once outside his house. Has anyone else run across that? --Azaram (talk) 18:14, 30 July 2015 (UTC)

Ok, I did miss that, derp. 6_9. But the next section says "Afterwards, only witches will spawn in the 7×9×7 area that is the witch hut." which is what I was looking at. Although now that I'm reading it again, that seems to say that 'even if something else could normally spawn there, only witches will', so double derp. (slinks off with tail between legs) --Azaram (talk) 20:38, 30 July 2015 (UTC)

Villagers turned to witches inside a house![edit]

We have a village set up to allow the villagers to breed, not a crazy breeder, but it does the job. We had 8-10 villagers inside a modified villager house, some with really good trades. One of the others on the server announced that there were suddenly 6 or more witches in the house killing the villagers. She tried to kill the witches but was being overwhelmed. By the time I got my character to the village, there were only a couple witches left and most of the villagers in the house were gone.

Condition to cast potion of harming[edit]

Consider a player within 3 blocks, without the weakness status effect, but with health less than 8

or already poisoned. According to offensive behavior, there is a 25% chance that witch will throw a potion of weakness.

It implies a potion of harming. The code looks like this:

In the defense section the article states: "When on fire or the last damage taken in the past 2 seconds was fire damage, and lacking Fire Resistance, 15-100% chance of drinking a potion of Fire Resistance."

What does 15-100% chance mean? Shouldn't the probability of drinking a potion be constant? That's not how statistics works. Even if the game randomized the chance of drinking the potion there should be some overall probability. –Preceding unsigned comment was added by 73.42.184.30 (talk) at 04:30, 8 September 2018 (UTC). Please sign your posts with ~~~~

The actual code implements it by a separate call for each potion:

This means that they're independent "rolls" when considering each potion. The 100% things were added by an IP (same with the now-reverted 80% one) without explanation, so I think it makes sense to just revert it. --Pokechu22 (talk) 15:18, 8 September 2018 (UTC)

Is there an official opinion on this? On one hand, their skin is not as gray as most illagers, and they don't pull their arms out of the villager position like the other illagers do. But they are still hostile and spawn in illager raids. They don't attack villagers, but neither do illagers attack them. So are they illagers? Villagers? Something in between? (Willagers?) 70.15.114.78 19:37, 6 January 2019 (UTC)

Can witches open doors? What can they interact with otherwise?[edit]

I really want to know if witches can open doors or anything else, because it seems like they are close to villagers based on what I've heard? I don't need to know this as much, but what else can witches interact with? –Preceding unsigned comment was added by 75.72.77.33 (talk) at 18:03, 29 January 2019 (UTC). Please sign your posts with ~~~~

Is this the first possible illager ever?[edit] 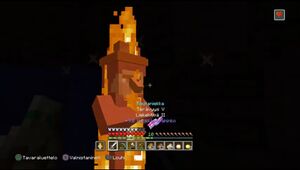