Right now the picture for this booster isn't accurate - it even says that it requires a slope that isn't made in the picture. Would it be cool with everyone if I just replaced the picture with a pic of a functional, accurate booster? Srsguy 23:35, 9 November 2010 (UTC)

Someone seems to have discovered a more compact two way auto reset booster, shown in action here http://www.youtube.com/watch?v=JidCrtXD_es –The preceding unsigned comment was added by Sterance (Talk|Contribs) 17:02, 6 December 2010. Please sign your posts with ~~~~!

The trigerable booster was first developed by me at www.minecraftforum.net/viewtopic.php?f=35&t=26655&start=150

It strikes me (I haven't tried) that using a stone pressure plate would work better than a switch. Put the pressure plate at the beginning of the track. Place your 'riding' minecart on it. The cart itself isn't heavy enough to trigger the plate, but the moment you climb in it triggers the booster cart. Akylax 18:55, 19 January 2011 (UTC)

Wish people would take pictures when you can actually SEE what's in them. :P The last picture under 'Uphill auto-reset booster' and the second one under 'Auto-Start booster' are both extremely dark. Can someone lighten them some, or recreate them? (Don't have anything installed to do it at the moment or I would...) --StarChaser Tyger 12:39, 26 January 2011 (UTC)

Booster without turns or slopes[edit]

It's possible to get a boost even if you don't use any turns or slopes, isn't it? Build your tracks like this:
= -tracks
[] -minecart
# -block

All you need is enough momentum to not get bounced back by your booster minecart. Once you manage to get right next to it, I'm pretty sure it results in a boost. --Rawing 09:05, 17 February 2011 (UTC)

I haven't seen an alternative to the classic door launchers being developed. A friend and I developed these. If they turn out to be useful to some others I'll post a tutorial on the page... Adys 02:37, 11 March 2011 (UTC)

Is it just me, or do boosters still work quite effectively, provided someone is riding them? It seems that unmanned minecarts tend to stop faster than manned minecarts...

I ask this after setting up the following track formation: 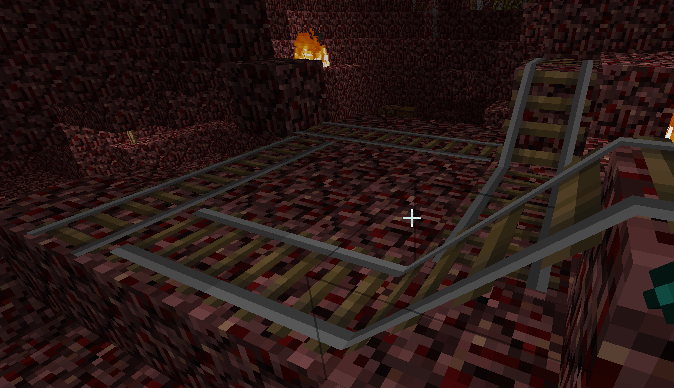 Test replication note: you get basically the same results if you replace the straights on the two corners with turn tracks.

Bold at Top of Article[edit]

I'm removing it for now, as there is no evidence that what is being said is true, or strictly necessary. If the metrics in the "Boosting Principle" section is inaccurate, then that should be edited. Xirema 20:01, 11 April 2011 (UTC)

There was another one I just edited out at the top in bold but I'm not sure if it's the same one you are describing here. I was gonna post here and saw your topic that I assume was about the same notice, so I'll just add on to yours.

I removed the notice in bold at the top for inaccurate information and just plan unnecessary for this Page. It's subjective to claim Powered Rails are the "Official" implementation over boosters not to mention the lack of notice on the Powered Rail page disclaiming boosters effectiveness over powered rails with less cost of supplies. The same reason you wouldn't put that notice at the top of the Powered Rail page is the same reason the previous notice doesn't belong at the top of this one. MDR 00:33, 26 April 2011 (UTC)