Triggered Repeater is a … clock?[edit]

Can someone reality-check me? The circuits on this page described as "Triggered Repeater" and "Inverted Triggered Repeater" are just user-toggleable clocks, right? I think this page is intended to be about repeaters in the sense of re-strengthening redstone wire signals ("repeat", in the sense of "re-broadcast"), not about (checks thesaurus) recurring pulses. --Munin295 18:42, 19 November 2012 (UTC)

I think it makes sense to expand the scope of this article. "Repeaters", while enough of a topic to justify a short article, are really part of a larger subject -- transmission circuits (getting signals from one place to another) -- which is currently spread across multiple articles. The topics such an expanded article would cover include:

The "Insta-Drop Instant Repeater" describes that it builds on "unintuitive piston behavior which might be changed in future releases". Well indeed. I tried it in 1.6.2 CMP and about 50% of the time it's fed a rising edge, the bottom piston does not re-extend and has to be woken up by a block-update. Feeding a falling edge after the piston has been extended works reliably. --217.122.163.157 17:37, 25 October 2013 (UTC)

Because of the double-pulse it needs to do to set up for the falling-edge, you can't run the circuit on anything faster than a 4-clock. If you run it on a 3-clock or faster, it doesn't have enough time to handle the next falling edge, so it will only react properly every other rising edge.

There are probably some other nitpicky things, but in 1.7.2 it still seems to work as long as you don't try to run it too fast.

Should the entry on smart wire be removed from the article? I've only ever seen two videos about it, and both were just demonstrating it, not actually using it for something.

What this page calls "Unary" has a name in real life electronics, called "One Hot encoding", where one of several different wires is high at a time to represent that number. –Preceding unsigned comment was added by 82.17.141.9 (talk) at 22:08, 4 February 2014 (UTC). Please sign your posts with ~~~~

That might be a better name. A lot of people in Minecraft call it "decimal", even if there aren't 10 choices. —munin ·

Maybe a circuit for single or multiple line multiplexing should be added? Example: Transmitting several bits per redstone line and parse them according to a daylight sensor synced time. -- Douira (talk) 17:41, 9 April 2016 (UTC)

Multiplexors are currently located in Miscellaneous circuits, though they are probably better classifed as advanced logic circuits (outputs purely determined by current inputs). But I think the whole subject is probably better presented in a tutorial because you can't really talk about multiplexors without talking about data encoding and other complex issues. —munin · 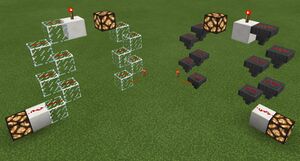 Currently this page mentions redstone ladders as being up-only circuits, which is generally true in all three editions of the game (i.e. PC, Pocket, Console). However, Pocket Edition seems to throw a wrench into matters: two-way (up or down) ladders can be made using glass or hoppers, but ladders made using slabs, glowstone or stairs are upwards only. I'm wondering what the best way to incorporate this information into the page without the section looking messy. For example, I thought about changing the Redstone Ladder section to something like:

Up Only ‌[Computer and Legacy Console editions only]

Up or Down ‌[Pocket Edition only]

However, the above formatting doesn't look neat; putting the information all on one line also doesn't look neat. So I'm wondering if anyone have ideas for how this information could be presented without confusing readers or looking disorganized. Jocopa3 (talk) 19:06, 6 February 2017 (UTC)

I would suggest a table, showing the different blocks that apply. On column would be up only, and the other would be both directions. The Blobs