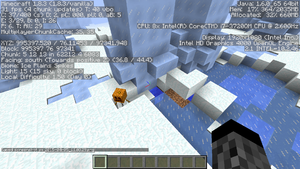 Snow golems in 1.8.8 don't seem to make trails of snow like they used to. Is it based on light level? I built a snow golem in a creative world near a cave with zombies in it in a plains biome, and it went for them, but didn't leave snow until it actually got into the cave itself. On the surface, built another, no snow. Got snow in the extreme hills, taiga, and taiga hills biomes during the day, but taiga indicates colder areas... --Azaram (talk) 21:28, 24 October 2015 (UTC)

Snow is only produced in cold and snowy biomes, plus the occasional medium biome (any biomes with a temperature less than 0.8). For some reason it's not listed on the article though. –KnightMiner t/c 21:45, 24 October 2015 (UTC)

The end of the Behavior section states: "Snow golems wear their pumpkin as a helmet, just like the player does," but I used the command "/entitydata @e[type=SnowMan] {}" and the ArmorItems tag did not have a pumpkin in it, even though the golem was visibly wearing a pumpkin. So is there any way to summon an already sheared snow golem?

I can confirm that /entitydata doesn't indicate any difference in NBT data between sheared and non-sheared snow golems .. this is interesting. I think there are a lot of mob features that NBT doesn't represent. Like an Iron Golem holding a flower, or particular AI states like a wolf shaking after having left the water. – Sealbudsman talk/contr 16:49, 24 April 2016 (UTC)