The term vanilla needs to be defined somewhere! There is a lot of friction in the community because of disagreement about what vanilla means.

In almost all other software, vanilla describes the 'Out of the box', plainest and purist version of a game or application. Therefore a minecraft server or client that uses the term vanilla in its name, should be unmodded, and without plugins or added custom software. A Minecraft Realm is good example of vanilla SMP gameplay, whereas a bukkit server is not.

Most servers that claim to be vanilla are in fact only semi-vanilla, and have area protection or teleportation that spoil the game for players who are interested in pure vanilla SMP gameplay.

Dowload the map from server[edit]

Is there a way to download a map from server without being admin? Or download at least chunks from it? Server sends whole chunks to client so it might be possible to intercept them, right? For example modify the client so it will save the chunks to HDD while walking through map... --TakeruDavis 09:42, 5 June 2011 (UTC)

A server game type where players rush to find as much gold with in a set time period (24 hour day, week, month, or whenever). Where the Nether is/is not allowed for the collection of gold nuggets. This game play could be used multiple times on a single server map along with any other gameplay or be used as a weekly contest to keep a server entertaining Sickma 07:05, 12 December 2011 (UTC)Sickma

Article needs a major rewrite. And what about Bukkit?[edit]

First of all, this article is really poorly written. The gamemodes in here are often never played, and most of the page is just warning people that hosting your server on your computer is a bad thing, which isn't necessarily true. Also, I think we could find a better video to link with this topic (possibly), as I am guessing it was most likely linked by the author himself, as he seems to have a very small subscriber base, and I am sure there are many more credible tutorials out there. And what about Bukkit? I think we should provide a link to its Minecraft Wiki page/website, or at least mention it here. Just about EVERY serious server host uses Bukkit. MinerHax444 00:40, 27 January 2012 (UTC)

I would just like to say you most definitely didn't overstep any bounds. That's actually a great edit. I didn't read all of your rewording closely, but you did great rewording the descriptions. I would like to suggest you register an account and continue contributing. Something I learned so far here, just dive right in and edit. If your contribution was reverted, reworded, removed, make sure to pay attention to the history page/edit summary for an explanation. As long as you have the rules in mind, feel free to help out anywhere here. --Kanegasi ☺C 03:58, 22 January 2013 (UTC)

Can I host a Minecraft server(.com)[edit]

Seems to be a scam, tells me everytime I could not host a single player because my RAM would be too low (6 GB), at the same time displaying an advertising for rentable Minecraft servers. Even if I enter a significant bigger amount it says I could host 0 players. Dont seems to be legit, deleted. -- 178.202.125.94 03:32, 27 January 2012 (UTC) I used this site just now and it does seem to be legit. I put in 2Mb/s Upload, 18 down and 3,072 MB of RAM, and It told me 6 players because of my slow upload speed. What stats did YOU put in to it? It SHOULD say how many players you'll be able to host and what stats are the cause for a lower number. I think we could add this back, because it seems legit to me. I also got NO link to a list of rentable servers.--Magiobiwan 04:17, 19 February 2012 (UTC)

I actually host a server, and followed the instructions to a tee, (Put in 1 MB up, 4 MB down, and 4096 Ram, all of which are true), and it told me that I can only host three players. At the same time, My server was running with 7 people, including me, a 4 persone skype call, 3 Windows Explorer windows, and the Benny Hill theme in the background, all without lag. I would have agreed with your site before I doubled my Ram and got a new, much better router. Completely disagree with your site through actually trying it.

It's not that the site is entirely wrong it's just that it only gives you an average. It seems to lean toward the lower end. It consistently says I can only host 15 people, currently hosting 50 with no lag and a ton of other services running in the background. So it does tend to lean toward the lower range and it is not very accurate but if you're serious about running a server you really shouldn't base everything off of one website you find. Just my two cents on this matter. --Zbob750 13:49, 8 June 2012 (UTC)

Hi i m an owner of my private server. I got an "Cheater" status to left up corner. How could i ger it off? (what i did? i sayed /togglerain cause i wanted rain but it wasn't it and i got cheater into to up left corner. anyone know how to fix? –Preceding unsigned comment was added by Arttuh (Talk|Contribs) 17:42, 1 February 2012. Please sign your posts with ~~~~

It won't let me on my friends server![edit]

In 12w18a, Mojang have made singleplayer a server. This means all worlds are servers, so you can ban yourself from one or whatever. Also, this means that singleplayer has 'inherited' features from multiplayer. This means certain sounds won't play and also, most agonizingly of all, the game won't pause when esc is pressed. That makes it so mobs could kill you when you try to change the difficulty or other options. Ultimately, singleplayer should be renamed 'Host Server' and multiplayer shold be renamed 'Join Server'. Jeb should look into this and correct it or alter it, because this has made me lose my items in a world when a creeper killed me as I changed the render distance...--88.110.112.190 21:21, 3 May 2012 (UTC)

Actually, the Singleplayer "server" is NOT a full-fledged minecraft_server.jar-style server. It's still different and you can still pause it, unless you hit the "Open to LAN" button in the pause menu.

Can anyone help me? I'm looking for a server with these details:

Normally, questions should be asked on the forums or on IRC, not here. In your Options under "Multiplayer settings..." is an Opacity slider for the chat box. Slide that to the right to make the chat darker. If this doesn't fix it, go to the forums and ask there. —Kanegasi ☺C 05:39, 1 March 2013 (UTC)

"I can't be bothered to make [a forums account]" doesn't magically allow you to post what doesn't go here. If you can't be bothered to properly request help, then no one should be bothered with your problems. After you read the above post, and went "woops lol", you should've deleted your post here and either made a forum account or Google'd what IRC is. Odds are you won't see this reply anyways. You've gone on your merry lazy way already. Just be glad Orthotope replied before I came across this, I would've removed it. ;) —Kanegasi ☺C 05:57, 11 April 2013 (UTC)

What is with all of the mention of "proprietary software" in the article?[edit]

Not all servers/plugins are proprietary. Both Bukkit and the factions plugin are both open source. This article should be edited, but I posted to make sure that this is an okay change. 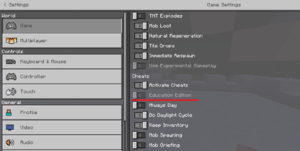 well there is more kick messages. I started a server and I opened the jar and "everything is fine". by "everything is fine" I mean every thing is working properly but when I hit that multiplayer button and use my servers IP (my macs IP) it kicks me saying connection refused. I tried to join my server I never played before and it did not work. (also my port is working too :P) –Preceding unsigned comment was added by Its really me (talk • contribs). Please sign your posts with ~~~~

I am planning on rewriting this article soon, as well as merging in the content from Operator and Administrator, and I have a two proposals about current content:

Mojang has released the Bedrock Dedicated Server (BDS) on their site. As seen on the bug tracker, it is the official name for it. It is currently in Alpha phase, and Mojang can always discontinue it.

Should we rewrite this article or move all instances of Bedrock Edition to Bedrock Dedicated Server?--skylord_wars (talk) 08:40, 15 September 2018 (UTC)