Three different sections on one and the same thing? Pulse generators, pulse limiters and edge detectors[edit]

I'm just wondering, why are there three different sections on one and the same type of circuit. They all send short pulses and do so only when their input changes from either ON to OFF or vice versa. How about merging these sections into one? Lego 19:50, 11 November 2012 (UTC)

Because they have subtle but important distinctions as to exactly what they do to the pulses, and how they respond to various input behavior. The differences may not matter much when you're hacking together a track switch, but I'd bet they're critical for folks building more complex circuits. There's certainly overlap, but that's why they're all gathered onto the "Pulse Components" page. --Mental Mouse 20:50, 15 December 2012 (UTC)

And now that I've been studying the page more closely, I'm starting to reconsider that. Edge detectors, Pulse Generators, and Monostable Circuits do seem to fall on a continuum, at least! --Mental Mouse 00:38, 7 April 2013 (UTC)

Honestly, the circuits are often the same, it's just the purpose you're putting them to that changes. You call a circuit-breaker a pulse generator if you're triggering it with a button, a pulse limiter if you need to control a sticky piston dropping a block, or a rising edge detector if your input pulses are of variable length (mobs over pressure plates, etc.).
I think it's important that each subject get its own section, just because people will be looking for things under those names, and to make them easy to link to from other pages, but the later sections may be more talky, just referring back to circuits already described in the first section.
—Munin295 ·

I disagree about the duration of the output pulse on Circuit C (i didn't check the others circuit). IMO it's more than 1 tick. The following circuit which delays the line being "broken" by 1 tick still have an output pulse. (note: i added a second repeater so that the piston does not retract too soon)

Some of these sections do need to be rewritten to reflect changes since v1.5 (I'm waiting for the wiki to stabilize on the new servers before doing major rewrites). Until then, if you need a pulse limiter, take a look at the rising edge detector section -- it's up-to-date, I believe. Specifically, the dust-cut rising edge detector would be the closest match (and has a more compact design), but there are lots of other options too.

Thanks for the confirmation and the links, I didn't know we could use camparator to achieve this. Ass you said, much compact than my variant.

I made a piston door and I was having problems with people spamming the lever and breaking the door. As a result, I embarked on a ~6hr quest to find a way to force the door to stay receiving power (open/opening) or not receiving power (closed/closing). There seem to be plenty of ways to ensure that it stays in one state for an extended period of time, but none to ensure both do, so after many trials and just as many errors, I finally came up with this design: This will lock the state of the door open or closed for 3.2 seconds (+/-2, not too sure about delay as a result of the center repeaters or the pistons, but it's at least 3 seconds which is what counts for me) and can be adjusted to longer or shorter by changing the length of the chain of repeaters leading to the pistons.

I'm not sure if this belongs in this page or elsewhere, but seeing as it's a sort of advanced pulse extender, I thought I ought to share it here.

Pretty, but is there a reason you can't just chain a dual edge detector to a pulse extender, then use that to lock a single repeater to the door? --MentalMouse42 (talk) 13:59, 3 October 2013 (UTC)

First of all, awesome use of the schematic template. I worry sometimes whether it's difficult for new users to pick it up, but you did great so I'm relieved.
This is an approach to off-pulse extension that I haven't seen before (locking repeaters), so it's probably worth mentioning in the article somewhere. I'll play around with it and see if there are better ways to do it, like MentalMouse suggested.
Thanks! —munin ·

I've been adding a lot of schematics to the article recently and it was getting close to timing out. So I'm going to start off-loading the schematics into LoadBoxes. While doing this I'm going to try something I've wanted to do, which is to add nice screenshots of the circuits (I think screenshots are less intimidating for beginners). Instead of having a LoadBox next to each description, I'm going to try having one big LoadBox at the top of each section, so you can see the schematics all in one place – also, fewer LoadBoxes and subpages to manage.

I've started this with Pulse circuit#Pulse extender, so let me know what you think. I'll wait a few days before doing the other sections to see if there's any feedback.

Finished off-loading the schematics in the pulse generator and pulse limiter sections, and the page seems to be loading much more quickly now.
—munin ·

I've been working on a little project and needed a Rising Edge Detector. In the given "Unrepeated Subtraction Rising Edge Detector" design, I don't know what the gold block and the parallel wire are for. Wouldn't it be enough to do it as follows? I tried it, and it seems to be working as expected. So is there any downside to this reduces variant, or an advantage of the current design?

Your design produces a 2-tick pulse. The gold block and parallel wire reduce that to a 1-tick pulse (by creating a subtraction 1-clock at the end of the circuit, but only running it for one cycle). Removing the block to get it back to a 2-tick pulse is discussed under Variations, but you're right, the purpose of the block could be explained better.
—munin ·

I just noticed the beginning of this page is a similar discussion, but seemed to be resolved as "no", which is disappointing, since, again, these are different ways to explain the exact same concept. Landfillbaby (talk) 10:54, 10 April 2019 (UTC)

And once again, same rationale applies: if I'm looking for a way to generate a 3gt pulse, no matter what input, I'll look at pulse generators. If I want a pulse on falling edge only, I'll look for a falling edge detector and won't care it's 3gt pulse. And if I'm looking to keep a pulse no longer than 3gt but allow shorter, I'll look at the pulse limiter section. I completely don't care the same circuit appears in two other sections - this is completely harmless. But if I don't find it in the section I need, this is bad. and I don't want to go on a wild goose chase over all sections unrelated to the task I want. So, please, don't fix what ain't broken. Sharfpang (talk) 21:31, 10 April 2019 (UTC)

I propose that a new circuit is added to the "pulse extenders" section (section 5).

This is not a new or uncommon circuit, but it's useful when delaying a 1-tick pulse to a 4-tick pulse without adding undue delay to the circuit. The page suggests to use a repeater with 4 ticks of delay (which does work) but it also delays the pulse by 4 ticks, which might be undesirable. The simple solution is to use three parallel repeaters, set to 1, 2, and 4 ticks.

One potential use for this is using the Instant Repeater-Line circuit with a 1-tick pulse input, in order to lengthen a 1-tick pulse to any desired length, whilst only adding a single tick of delay to the circuit. 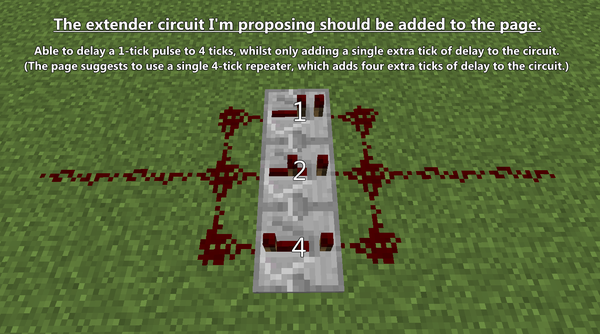 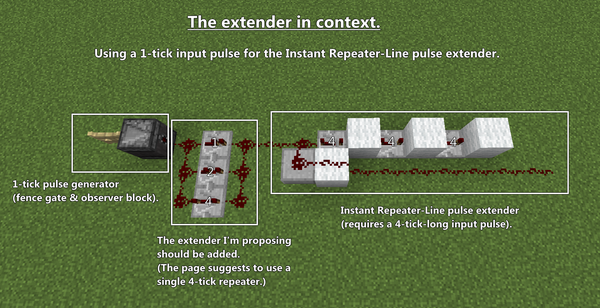 I think they're worth mentioning in an article about pulse circuits. T flip flops toggle their state when they receive pulses, so they're like reverse edge detectors. an_awsome_person (talk) 22:55, 1 August 2019 (UTC)

Not as a separate section, I think - they have their place in Memory circuit - but I think mentioning them in the introduction of the Dual Edge Detector section would be valuable. Generally, an introduction to pulse logic would be nice. Sharfpang (talk) 21:33, 2 August 2019 (UTC)