This page has unconfirmed features, which don't even have a source. Should they be removed? The Blobs

Agree – DelboyDylan (talk|contribs) 22:31, 21 November 2016 (UTC)
Agree We should semi-protect the page, as a lot of the vandalism comes from unregistered users. The Blobs

Should structure blocks and structure void be mentioned as added block? They are in the game code and do work, but they are completely inaccessible via any means (except with mods) because they're not assigned a block ID. Jocopa3 (talk) 04:00, 22 November 2016 (UTC)

I would say they're worth a mention, yes: here and on the structure block history page. As long as it's properly qualified. – Sealbudsman talk/contr 12:46, 22 November 2016 (UTC)

Yes, we should mention structure blocks, but it should be noted that they can only be obtained via inventory editing. The Blobs

FYI - Structure blocks and structure void will not be implemented in 1.0. I just confirmed with the dev team. I put notes after them regarding this. --HelenAngel (talk) 21:48, 23 November 2016 (UTC)

These are listed on the wiki page as features but I just confirmed with the dev team that they will NOT be in 1.0 (and they aren't in any of the current betas either)

Also be aware that some features may not make it in if they aren't able to be fixed properly, such as the locate command (which was removed during the second beta refresh). --HelenAngel (talk) 21:48, 23 November 2016 (UTC)

Part of the reason for including some blocks/items because of the fact that they appear in the game code. For example, Ender Pearls were partially added to the game code in 0.14.0, but weren't accessible without modding the game; the wiki still acknowledges they were partially added in 0.14.0 despite not being fully implemented or obtainable whatsoever. Ravines and Fireworks currently don't exist in the game code and thus shouldn't be mentioned at all. However, structure blocks are partially implemented in the beta game code (screenshot from decompiled 0.17.0.2 binary: http://i.imgur.com/E2eHodq.png) and can be modded into the game in a fashion similar to ender pearls. Both stained glass and stained glass panes have block ID's (ID's 241 and 160 respectively), but aren't obtainable without inventory editors, and the rendering engine doesn't support semi-transparent textures yet hence the reason for using the regular glass texture; though magenta stained glass (block 241:2) still generates in end cities in the current beta's as placeholders despite not being fully implemented. I'm not trying to argue since I know you work or communicate with the dev team, but the wiki documents absolutely everything, even features that are unfinished or not included in a release. Jocopa3 (talk) 01:50, 24 November 2016 (UTC)

Totally fine to keep it in, of course- the only reason I don't include it in the changelogs is because it's not fully implemented. Great work on adding the notes to it as well so folks won't go looking for it in the regular game. :) In addition, I can email the raw changelog to you (or whomever covers it) in advance so you can get it up faster if you want. Just let me know! --HelenAngel (talk) 01:11, 29 November 2016 (UTC)

There seems to be debate on whether the locate command exists. Some people think it works only for strongholds, while others think it doesn't work at all. Which is correct? The Blobs

No, the /locate command doesn't work. I have tested the command multiple times in the beta. (on my tablet and on an android emulator) Strangely, it appears in the command list, so that might appear to be throwing people off.
However, it might be a bug. --SamGamgee55 (talk) 18:21, 7 December 2016 (UTC)

The locate command was added to the standard.json file in PE 1.0.0 build 1, removed from that file in build 2, then re-added in build 3. The featureType enum in the game code originally included all 7 possible structure features, and still included them in build 2, but in build 3 the enum was changed to only include featureType 4 (a.k.a. stronghold). So the /locate command was added to PE 1.0.0 build 3 and was intended to only find strongholds, but due to some other bug does not work properly. Jocopa3 (talk) 19:22, 7 December 2016 (UTC)

I don't mean to be rude, but the Pocket Edition for Windows Phones has been out for over two years now (December 10, 2014). Maethoredhel (t • c •

R6Games: It was unclear if you were discussing Pocket Edition 1.0 in your statement. Could you please clarify? Thanks, Maethoredhel (t • c •

I was wrong. R6Games, you are correct. The version for Windows Phones is still at 0.16.2 according to the Microsoft Store. Thank you for pointing this out. Maethoredhel (t • c •

I hope I haven't started an edit war, but I reverted BDJP007301's revert on your edit and referenced it. I will await further input from other editors if they feel like weighing in on this discussion. Thanks, Maethoredhel (t • c •

From https://feedback.minecraft.net/knowledgebase/articles/888006-minecraft-pocket-edition-faq
"Is the 1.0 Ender Update coming to “Minecraft: Pocket Edition” on Windows Phone? Why not?

The 1.0 Ender Update will not be available on Windows Phone 8.1. Every Minecraft platform has different needs and our priority is to focus on long-awaited features for as many players as possible." Feel free to contact me directly if you have any questions. --HelenAngel (talk) 01:29, 5 January 2017 (UTC)

HelenAngel, thank you for pointing that out! That leaves me wondering, because I don't have a Windows 10 phone and so I don't know how it works -- can we get Windows 10 edition on Windows 10 mobile? If so, has it always been that way? – Sealbudsman talk/contr 02:06, 5 January 2017 (UTC)

No, you can't get Windows 10 Edition on Windows 10 mobile. I'm also not entirely sure how getting Windows 10 apps on a Windows 10 mobile phone works (as I work strictly on Minecraft and sadly am not in touch with the folks working on it in Microsoft). --HelenAngel (talk) 02:17, 5 January 2017 (UTC)

Aha. So if Windows 10 Phone doesn't run Win 10 Edition, it seems it must run regular Pocket Edition. So HelenAngel, if you know, have they indeed released PE 1.0 for the Windows 10 Phone? They've only discontinued it for Win 8.1 Phone, is that correct? – Sealbudsman talk/contr 02:34, 5 January 2017 (UTC) 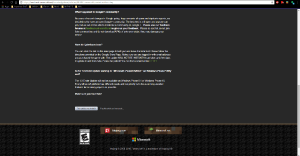