So i don’t remeber where i saw it i think it was in another wiki or forum but apparently there is now a horned sheep and a wooly cow. And that the moobloom can be milked for dandelion soup and can be killed to obtain a petal witch can be used to craft something, i don’t remember. And that when killed the cluckshroom dropped something that had to do with potion effects. We might need someone with access to the closed beta demo. Who’s with me? Gamepedia gato feliz (talk) 15:10, 19 October 2019 (UTC) 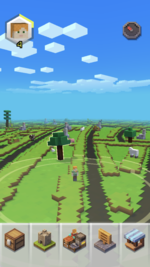 I have access to the thing - Early Access version 0.6.1 . Our article isn't good as its based on press coverage. A simple example - potions aren't in game (yet). It doesn't explain how you actually play (and nowhere does really - including the game itself which has no tutorial).

I think the most useful thing I can do is upload screenshots. They need editing, and probably animating.

The game has multiple 'modes'.

The thing I'm calling tappable mode is a bit like pokemon go. You walk down a map of your area which has things spawned on it. Some of them are mobs, some are resources. You click on the item and collect it by clicking three or so times (blocks seem to be 3, animals 4). Chests spawn (and despawn) and contain rarer items. There are things with beacons coming off which are adventures (another 'mode').

Mobs you capture go into your inventory. I've seen cows, pigs, sheep and chickens. You cannot do anything with them in this mode. You can place them on a build plate later. 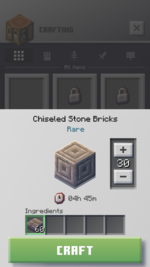 There is basic crafting. Not all recipes are in the game - there are no chests (to craft) for example. There are flowers but you cannot make dyes out of them. There is granite but you cannot polish it. Crafting time increases with rarity. It can be sped up with rubies in classic f2p game style.

I've only seen oak, birch and spruce so far. They have only dropped wooden logs.

There are no hostile mobs. 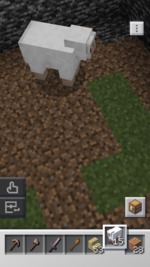 You place a small square grid - the game requires it to be in a lit area with a textured surface. There a small number of 8x8 build plates you can place - you get an extra one unlocked every 5 levels. You can also buy some more with rubies (currency) including 16x16 ones. You can dig down - your build plate is surrounded by bedrock.

If you put an animal in your task bar it will spawn on your block. If you then select your sword you can kill it for wool and lamb (if it's a sheep). I don't think you can cook the lamb yet.

I don't have an image of a spruce tree, nor of the first build plate as I changed it. I was thinking that the images after 1, 2 and 3 taps could be animated which is why I took a screenshot of each stage. Screenshots taken on an iPhone 8. I haven't done adventure mode yet.

It would probably be best if most of those were cropped so that there isn't so much black space above and below the subject of the image. ~ Amatulic (talk) 01:25, 27 February 2020 (UTC)

The Bone Spider is an announced mob for Minecraft Earth. Was mentioned here. Is first MCE exclusive hostile mob variant. Assumed none have been found yet.

Minecraft Earth is not another edition of Minecraft (java,console and bedrock), is actually a new game based on Minecraft. I'm not going to extend this explanation because I don't speak english normally, but I'm trying to say that if all features of all Minecraft games in a wiki wich was originally meant to be the wiki of the main Minecraft game, it will be "confusing" or "des-orientative" to see many articles saying "this is from that game, not from those others" and we also need more organization, because obiously all wiki contributors we want wikis to be intuitive... My proposal is that we have to create a "main" minecraft wiki about the Minecraft franchise, mojang, etc (something like https://www.minecraftwiki.net/), and other gamepedia wikis about Minecraft games (F.E. "Minecraft Earth (Game) Wiki" (https://minecraftearth.gamepedia.com/), "Minecraft Dungeons (Game) Wiki" (https://minecraftdungeons.gamepedia.com/) "Minecraft (Game) Wiki" (https://minecraft.gamepedia.com/, this wiki)). It would be huge project, but we still are on time to do this, because we only need to move all pages about Mojang, Mojang Employees, and the main articles of minecraft games to that "main" minecraft wiki, and move pages related to other minecraft games to their respective wiki. Thank you for reading, I know this would be a bit expensive, personally I think this wiki is a bit chaotic, but I'm only trying to help Minecraft and its community, really thank you.

I disagree. Yes, it's a new Minecraft, but it has so many things in common with regular Minecraft that there is no point in a separate wiki. The game has more in common than it has differences.
This Wiki is about all things Minecraft, and I don't see any confusion. I do agree that some better organization is needed. The Minecraft Earth article should list all related articles (not just in the footer) as well as differences. ~ Amatulic (talk) 20:20, 26 February 2020 (UTC)
See the ongoing discussion here  Nixinova  T  C  08:28, 19 April 2020 (UTC)

When playing an adventure, I found a green block with a red spot on top. It was emitting strange particles and when I tried to interact with it it did nothing. I couldn't get a screenshot. Has anyone else seen this?

Yes, I have a screenshot and I have added it it to Adventure (Minecraft Earth)#Combat. It is a "reward" block that appears when you have eliminated all the hostile mobs in an adventure, and it gives you some rare items. ~ Amatulic (talk) 22:53, 19 March 2020 (UTC)

Due to the addition of the journal, the Minecraft Earth R17 Patch added a LOT of mobs. Here's a list, delivered from here.

"With the addition of the Player Journal, we wanted to add some diversity to the Mobs you know and love! Please welcome the whole herd of new Mob variations to collect:"

In the Journal, a blank slot in the Chicken category that said "item.entity.spawn_egg.skewbald_chicken" or something like that. What is this hinting at?

For your convenience, here is a list of entities with missing isometric renders:

Until MCE 0.19.0 the only squid in game is the entity registered as glow_squid. In MCE 0.20.0 the added squid is registered as genoa_squid. The genoa_ entities are the vanilla minecraft version of an entity. The texture is also the same as normal squid, with the addiction of the blink face(like in any other living entity texture).Slexom (talk) 15:28, 21 June 2020 (UTC)