Perhaps it should be noted that hostile mobs can in fact be put on a leash by modding the region save files. However, certain other mobs such as flying mobs and players cannot be leashed, even in this way.–Preceding unsigned comment was added by Firebastard (Talk|Contribs) 15:59 19 April 2013 (UTC). Please sign your posts with ~~~~

Expressing your excitement of a feature should be done on the forums, rather than the wiki. – Goandgoo ᐸ Talk
Contribs
Edit count 02:41, 22 April 2013 (UTC)

There are two pictures on the 'Lead/leash' page that, for one, do not use the default texture pack, and for two they are simply just irrelevant. Should they be removed?

I tied some horses to fenceposts at a distant biome, then went to ride them one by one to my home, proceeding to tie the horse to a post there. Whenever I'd be back to the group, at least one horse was loose and its lead was nowhere to be found. (maybe it despawned if it detached, each roundtrip was way above 5 minutes). Nevertheless, they didn't hold the horses reliably. Could someone confirm? Is it a bug or intended behavior? RandomBlank 08:53, 3 July 2013 (UTC)

Also this seems to be happening in 1.7.2, . It is definitely a Bug, and not merely as some of these bug report links suggest related to some prior version's "leash becoming invisible but still tying the Mob," Bug: instead, I can reliably come-back to Anywhere, to find that newly re-loaded chunk with the Leash /Lead untied, showing for awhile as a dropped item.

This sometime-Bug again for me too seems to be Lag-related. I have several other Bugs no-one's reported (a Boat-Breaking Bug, Far from shore; Lag building-up causing me to have to Re-Log, if not Quit, entirely), including the other variation, above I've found just-after that other above, of the Lead becoming-invisible.

This seems to no longer a problem as of 1.15. Leashed mobs will remained leashed even when the chunk unloads, only when they travel to another distension do the leafs detach. Kevinshu0930 (talk) 06:42, 7 April 2020 (UTC)

How to Lead Hostile Mobs?[edit]

Hello, does anyone know how to specifically modify the save files to lead hostile mobs? Can anyone help me? Thx. CreativeMakes101 09:03, 8 July 2013 (UTC)

"If you leash any mob and tie it to a fence then kill it, the knot will still exist. Making a way to double leads if you have an infinity enchantment on a Bow which is renewable via trading." Can someone explain what this means? It sounds like it's describing a way to make a double lead (but you can already attach multiple leads to one fence post) and I don't understand what the bow has to do with it.67.182.130.241 06:32, 21 July 2013 (UTC)

Apparently you can lead ghasts. It can be seen on Docm77 youtube's channel. I haven't tried it though.

The Ghasts are of course Big, and their hitbox however may not be. If they're Hostile I don't know why this should work, but I wonder if they can destroy the Lead: they should be able destroy the Knot in the Lead attached to any Fence - and their Blasting attack causes Fire often, which would Burn the - detached, Lead. Yilante 50.1.134.10 08:20, 15 January 2014 (UTC)

Riding Mobs Suspended by a lead[edit]

I recently noticed while tinkering around with leashes that if I try to ride a mob that I've suspended from a fence (such as a pic or horse) they die a few moments after I get on them. Is this normal? Can anyone confirm this? I didn't notice anything on the wiki, but maybe I missed it. ~~Anonymous Gamer~~ –Preceding unsigned comment was added by 107.77.97.54 (talk) at 0:43, 29 November 2015 (UTC). Please sign your posts with ~~~~

This is actually an issue with fall damage calculation, which is a mob suspended still counts up on fall damage despite not falling farther. When you get on the mob, the lead likely breaks or stretches causing you to finally hit the ground. –KnightMiner t/c 01:15, 29 November 2015 (UTC)

Can skeleton horses be leashed?[edit]

I'm having trouble using a lead on my skeleton horse. Is it even possible?

It is proven that if you put a lead item in the head armor slot it renders in front of the face rather than above the head like other items. 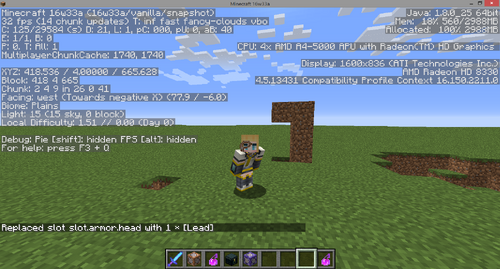 I'm Jinx, and I'm new to Gamepedia. Just introducing myself. I've spent quite a couple of years on Wikia, however, so I'm familiar with editing like this. :)

Also lol, I almost forgot to ask my question about the lead. There's a glitch when you have it on a dolphin, and you're underwater, and you attach it to a fence. Then when I walked inside my glass house, the dolphin suffocated! I didn't bring it in my house with me; I left it outside attatched to the fence. Can anyone clarify what is happening?

You should really post that on the official minecraft bug tracker --AFellowEditorLikeYou (talk) 20:27, 10 July 2020 (UTC)

This article briefly mentioned that you can attach leashes to mobs via NBT editor, but it never mentioned which specific tags to modify. Can someone find which tags control leads? --AFellowEditorLikeYou (talk) 20:27, 10 July 2020 (UTC)