I found Shakesperean English appear in the menu. It wasn't there until two weeks ago, and I haven't been in the 1.13 snapshots. What's up with that?

I will look into this "Ido" language, but there is definitely a Shakespearean English option in the language list, in version 1.12.2. See the screenshot I was able to take: 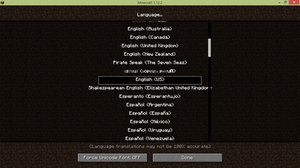 I just finished going through the language list and I haven't noticed it. I am sure a second look would be nice though (especially that I heard that file names are gonna change again today... thanks Grum for caring about not breaking modded games too much). --Hubry (talk) 20:13, 16 August 2018 (UTC)

@Cuervo: Here are references about Chinese:

Language updates are not tied to game versions and it's been like that for a while. Mojang still even keeps 1.13 files on Crowdin, so they could add a language now, update the translation files for 1.13 and a new language would be added to that version. If anything there should be a date of first implementation into Minecraft, or something like that, but it's pretty much impossible to go back and see when all the newer languages were added to the game.--185.251.138.143 15:42, 10 June 2019 (UTC)

There were two languages added recently -- Interslavic and Andalusian, could someone look into that? Waterrail (talk) 12:18, 1 March 2020 (UTC)

Splitting font to a new section[edit]

Now in 20w17a, a font section has been added to the [text format]. It represents a custom Unicode Font available to the client and is not related to language.

I suggest moving this font into a separate font page. Current font page is a redirection to this page.