History section out of date[edit]

The history section only shows a handful of versions. Then, for some reason, the changes for a much larger number of updates is listed in a table underneath instead of the history section. That other table has changes listed almost entirely as "unknown". For whatever reason, I have not received any automatic updates since Minecraft Launcher 1.6.73. Looking at the pictures at the top of the page for 2.0.847, the GUI is unrecognizable. Shouldn't the history section of the launcher use similar formatting to the history section of everything else on this wiki? And can we please update the history section to specify at least visual changes and note that additional details are welcome?

p.s. I have no idea why the picture of the old launcher I embedded is on the right instead of under this section. Could someone please fix that for me? 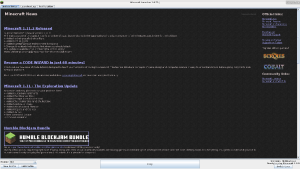 Every other page on the wiki has a history section that increments with versions of the game -- this was the of the launcher as well, up until the 1.6 launcher. Then it got the ability to release independently of the Minecraft version. That's why the two different sections.
To roll those entries into the normal, standard looking history section, we'd have to update the {{history}} template to work with launcher versions. And this just hasn't been done yet. Yes, it would look better.
As for asking for additional details on old versions, I'm not sure anyone is in a position to actually supply those details, so I doubt that making an explicit ask would be fruitful.
Having watched the development of the launcher, it seems like the list has been pretty comprehensive. Some updates made no visual change that anyone was able to tell, and this is understandable because sometimes there are just bug fixes and things like that under the hood. But yeah, having all those 'unknowns' is unsatisfying. – Sealbudsman talk/contr 01:56, 11 May 2017 (UTC)

The section that describes "Time Machine" should be renamed to "Backward Compatibility". This is more suitable.--Skylord wars (talk) 11:10, 8 April 2018 (UTC)

Omit the "Minecraft" on the title[edit]

I think the name "Java Edition Launcher" or simply "launcher" would better suit the article. The "Minecraft" bit is redundant, considering this entire wiki is about Minecraft. Thoughts? --HaydenBobMutthew Talk 13:55, 29 July 2018 (UTC)

It was now moved. – Nixinova

I propose a "launcher version history" page and to also split the individual versions into their own pages, as the content is becoming large and they now have beta versions. I already split Minecraft Launcher 2.1.2474 and nobody seemed to mind (or notice). Should the rest be split? – Nixinova

I think this page should be renamed yet again to "Minecraft Launcher" as Minecraft: Java Edition is now a tab of the launcher next to News and probably Minecraft Dungeons soon. - Hugman_76 [

What about to just "Launcher"? – Nixinova

The website is titled "Minecraft.net", and the launcher will expand to games other than core Minecraft soon. – Nixinova

Do we know this, or are you guessing? It's not uncommon for companies to advertise their new games in launchers for this old ones. Is the Minecraft Dungeons tab not just going to be a link to buy the new game? –Majr ᐸ Talk
Contribs 12:29, 21 June 2019 (UTC)

This article. Quoting from the article:

It sort of does, as the many pages about the launcher are inconsistent. – Nixinova

Support "Minecraft Launcher" as that is the name of the program. As said elsewhere, it will contain Dungeons but that is still a Minecraft game, unlike some other games by Mojang. --Robotkoer (talk) 17:18, 1 October 2019 (UTC)