Jeb stated in some tweet that the Wiki's guess on the iron bars was very accurate. They probably are not spikes, then. Camo Shoe Club 23:35, 3 July 2011 (UTC)

The unidentified object in this picture may be iron bars as well. Or they could be spikes. Is it worth a mention in this article? It's not definite, please mention that there is a lot of speculation going on, but there is a strong indication that it could be bars 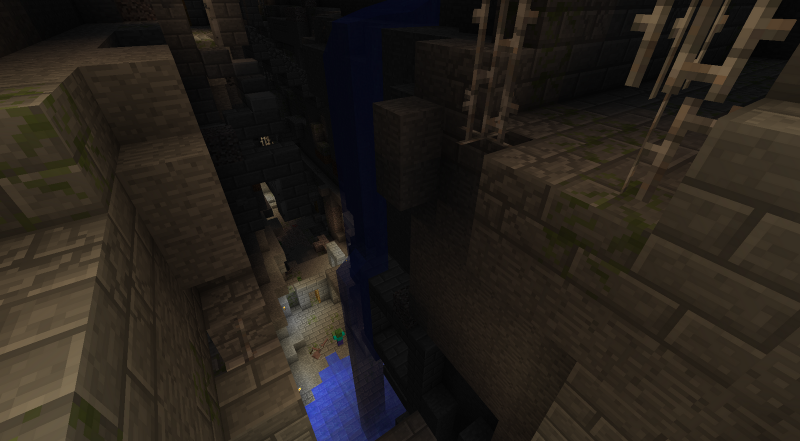 Who said that iron bars are mine-able with shears?

That would be epic win. does anyone on the minecraft development team actually have MCW accounts? --HexZyle 07:16, 14 July 2011 (UTC

I believe these pictured blocks are vines. Reasons for not being spikes or iron bars: 1) If you look at the blocks, they have pixels coming off of the main "shoots" which indicates that they are not bars. 2) They are not pointy and they are stacking hence, not spikes. 3) The color would not make sense for iron bars or spikes (presumably made of iron). The color is in fact a perfect match for a vine. 4) If you look at the blocks on the right side of the image you will notice that they don't sit in the same place on their square in the same way that tall grass does. Since vines are another plant item, it would be only logical that they would grow somewhat like tall grass.

I agree, I think they are vines. If they are bars or spikes then they look really stupid. They don't look like iron and aren't bars at all. And there's no way there spikes.Discount Flunky 14:49, 17 July 2011 (UTC)

This has been created, discussed, argued, and deleted MULTIPLE times. No one is sure about what this is and it is best if we all just wait or someone gets a tweet response from someone at Mojang. Please stop this. --Dbdii407 16:16, 16 July 2011 (UTC)

Speculation increases anticipation for future updates and reels in players to buy the game/resume playing after they have gotten bored. It may be annoying on the Talk pages, but it forwards and somewhat unites the Minecraft community to forward their ideas on upcoming updates. --HexZyle 12:48, 17 July 2011 (UTC)

The only thing that will "reel" players to buy the game/resume playing is the actual update, when it happens. I like it when a wiki, such as this one, contains true and genuine information. It gives me an unsteady thought when "Iron Bars", "Spikes", etc.. are randomly added/removed from here. It can be very confusing. --Dbdii407 15:03, 17 July 2011 (UTC)

True. I'd rather people just discuss it rather than continuously remove and add it without consulting others because they think their idea is "right". --HexZyle 03:56, 18 July 2011 (UTC)

I don't feel that the picture provided on the main page proves that they are Iron Bars. However, in a detailed video presented by Notch himself, he hovers over it, and it says Iron Bars as the name.

(Not sure how Wiki pictures work, sorry)

This is the video by the way:

I just mined some iron bars with a diamond pickaxe and it took no more than two seconds, so I deleted this bit of trivia. Lunakki 15:19, 1 December 2011 (UTC)

One can use iron bars and doors to make arrow slits. Placing them next to each other leaves a small gap between the bars and the door that one can shoot arrows through (and mobs can see through). With enough arrow slits made this way, one can create overlapping fields of fire. like this: +_+ (+ is iron bars, _ is door) 98.85.28.227 19:27, 6 December 2012 (UTC)

Can someone test if this is true or post a link to a Twitter post or changelog that describes this? I really this fact is true:

"While curing a Zombie Villager, iron bars placed nearby will speed up the healing process. The same happens with beds, and both these things occur in the stereotypical prison cell, encouraging players to imprison them."