Maybe we could do something with the templates instead of screenshots. E.g:

Well first we'll need the textures of the terracotta to actually work.
Then we'll need rotated variants of each. I support though. - MinecraftPhotos4U (talk) 21:52, 11 February 2017 (UTC)

Support this over gallery screenshots. One consequence of having these parameters is that we could now deprecate:

And, MCW:Projects/Structure_Blueprints is an example of another place where having general-purpose sprite rotation would be quite useful. – Sealbudsman talk/contr 16:22, 21 February 2017 (UTC)

While I don't think the implementation is quite right, I agree that rotation is useful to have for blueprints in general. However, I don't see any reason to use the all those sprites just for this single page. Screenshots (which could still be put into the layered blueprint format with an altered template) would be much more efficient. Viewing the gallery section with the last layer selected brings my browser to a crawl, due to all the below layers being drawn under it. I could probably improve the performance by using JS to hide layers that aren't visible, but screenshots are a lot easier. –Majr ᐸ Talk
Contribs 08:24, 26 February 2017 (UTC)

I have heard that glazed terracotta cannot be moved by slime blocks. Is this correct? The Blobs

GT
neither can this:

Since I play Pocket Edition, I cannot test this, so someone else will have to do so. The Blobs

Given the confusing, bizarre nature of glazed terracotta, would it help to better explain how the block type's textures are mapped onto the cube?

The following excerpt comes from the template .JSON file that defines the block model. "South" refers to the front face of the terracotta block (the cardinal side that faces the player when placed).

I read this and render Glazed terracotta using model.json, it looks different. 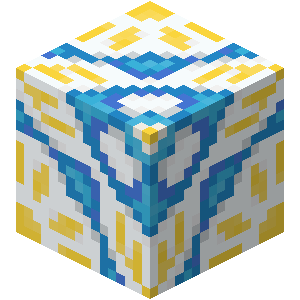