I think the admins just created that account to stop anyone else registering with that name and causing confusion. --HexZyle 19:51, 22 July 2011 (UTC)

In the 'Uses' section of this page it is suggested that the player cannot 'fit through' glass panes but items can. I assume the author meant in the case of a 2x2 arrangement. This of course is not true. If the author meant something else I would suggest they change it to avoid confusion and some nasty accidents :) 86.129.49.52 06:33, 22 December 2011 (UTC)

If glass panes were in this order (from above): -- -- Then there is a space in the middle without a pane, and the 2 panes beside that empty spot are half length. Would a spider be able to fit through that? if not, this would be the bast mob-proof way to get a clear view of the world outside your house ~~Harishimomo~~ –Preceding unsigned comment was added by 67.188.81.21 (Talk) 03:58, 22 September 2011. Please sign your posts with ~~~~

Glass panes have a strange effect on creepers. There was this one who went off while inside the space of a glass pane, and the explosion did almost no damage whatsoever, like it was in water. When you stand by a glass pane wall or something, and a creeper does too, it wont go off cause it thinks there's a full block in between you or something. Im not sure how to word this properly, so ill just let someone else try. Toadbert

I have confirmed this. A set of 4 glass panes, in a 2x2 space 1 block high, will let a player drop through underwater, without letting any water in. A set of 4 pistons, facing straight up, placed 3 blocks below the glass panes, will leave a space 2 blocks high that the player can walk in. If the player stands directly in the center of the 4 pistons (right under the opening between the glass panes) and activates the pistons, it will raise the player one block, and by jumping the player can re-enter the water from below. When used with a button, the pistons remain up long enough to exit, but retract and allow entry at any time afterwards. 184.99.71.49 02:13, 26 March 2012 (UTC)

I think it should be noted that hostile mobs (such as the creeper) regularly de-spawn from the map, making the effort of obtaining a creeper wasted, and also creatures will (at least in multiplayer) glitch through fences, glass panes & iron bars, making the trophy case useless (and dangerous if the creeper gets out and notices someone). The Dire Reverend 05:51, 30 January 2012 (UTC)

Indeed, not to mention that if the player switches to Peaceful for any reason for any amount of time the creeper will disappear.

I feel like the trivia points about growing trees destroying panes and spiders being able to fit through the panes (less so than the first) should be classified as bugs, unless Mojang has stated that it is working as intended. 71.171.49.35 02:43, 4 February 2012 (UTC)

Mobs saw me through glass panes?[edit]

I was in a house in an NPC village in a 1.1 superflat world, and I had a bit of a scare. Looking out the window, there were many mobs aimlessly wandering - and then a zombie heads right towards me and enters pursuit mode. Less than three minutes later, I hear a "TWANG". Now a skeleton saw me through the house's windows. The arrow was stuck in the window. Soon after, another skeleton HIT me with an arrow through a glass pane, and again, without seeing me "in the open" first. Is this a bug? A result of a mod conflict? RadicalOne 06:22, 31 March 2012 (UTC)

Update: Playing a survival world, I had an even worse surprise - a creeper spotted me through a wooden door and charged me. And yes, he began his countdown, though fortunately my house is big enough that I outran it.
I wonder if this has something to do with a bug I am experiencing, where I often end up placing blocks "through" other blocks, or at least on their far sides instead of the near ones. -RadicalOne•Contact Me•Chase My Tail 19:43, 31 March 2012 (UTC)
An image of the creeper scenario occurring, plus a few other mobs that saw me through the other windows. 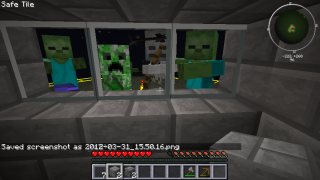 Another update: It appears that I can force them to see me through panes by walking up against them. Is this normal? -RadicalOne•Contact Me•Chase My Tail 21:14, 6 April 2012 (UTC)

I've seen mobs occasionally target players through various blocks ever since skels were added. I don't think it's panes in particular. Load up the minimap with mob radar and mob facings, build a 9x9 hollow cube of anything (that size just so you can move around), light inside, night outside, completely enclosed. Dirt, cobb, almost anything will do. Let mobs spawn, walk around some (flying works too, just don't use creative), watch the facings turn and try to reach you. Some (usually spiders and zoms) can target if they just get close to the outside wall. Others won't. I always figured it was outlier pathfinding miscalcs when figuring "visibility" of players by mobs. Olagarde (talk) 01:24, 28 February 2015 (UTC) Update: on second thought, isn't them seeing us a reasonable reaction? After all, we can see them.... ;-)

I am not sure how much it changed since the initial topic started (almost three years ago), but in the most recent versions of Minecraft, mobs cannot see though blocks such as glass panes. It is most noticeable in the nether where a wall of glass panes blocks ghast line of sight. For the most part the mob tracking you beforehand causes them to still see track you through the blocks. The fact that glass is clear does not really affect their behavior.
Zombies have an increased tracking ability, so their behavior is a bit different, but their behavior is not affected by glass anymore than another block. As for spiders, they could see through walls up until 1.8. –KnightMiner t/c 03:54, 28 February 2015 (UTC)

'Coexist' is an inaccurate term. When there are at least two adjacent snow tiles, Optifine will render the block under glass panes/fences/etc. with the same texture as snow. However, this is purely cosmetic, and there is no real snow: it cannot be broken or harvested, there's no hitbox, and it cannot be melted by torches (though it is removed if the adjacent snow melts). -- Orthotope 09:10, 14 June 2012 (UTC)

Can mobs pass/fall though a "ceiling hole" of glass panes?[edit]

The article says the player can and items can, but does not say if mobs can.
1) When making the glass pane "hole" (2x2 horizontal placement of glass panes, which creates a square hole in the center that the player can fall through) can mobs pass through that hole as well?
1.a) Is that intentional (pathfinding) or accidental?
2) If that set-up had water above it, can hostile mobs access that hole? (If the water were only 1 block deep above the glass panes, could a mob pass through?
2.a) Would it be intentional or accidental?
2.b)If it were two blocks deep - would they know to "sink" though? 50.181.85.8 20:20, 18 December 2013 (UTC)

So I'm guessing there's a reason for this (since it's been around since the introduction of panes, unchanged) and I'm just too derp to notice. Why do panes visuall appear to map their texture one half-block offset horizontally, so that any texture with an intentional border in the texture file places the border pixels in the middle of the placed block? In a row of: dirt-pane-pane-pane-dirt, why have either the pane texture or the texture mapping function, or their combination, make it so that the visual appearance is dirt, half-pane, pane, pane, half-pane, dirt? Or for that matter, so that a single pane placed in a 1x1 horizontal hole maps the pixels at the left-right edges of the texture file into the middle of the hole?

The reason is likely due to the fact that panes when connecting to blocks only fill half the block in any unconnected direction. For example, two panes connected directly to each other displays a total of one full pane texture, while without the offset the edges would be empty and a line would be through the center. –KnightMiner t/c 03:57, 28 February 2015 (UTC)

Anyone know why the stained glass pane images are not showing up in the infobox? –Goandgoo ᐸ Talk
Contribs 03:18, 7 February 2016 (UTC)