While building my Nether fortress, I noticed that Ghast shots do not blow up my fences. Could anyone confirm that fences cannot be destroyed by the Ghasts' fireballs ? -228.zip, 19:42 20 December 2010 (UTC +1)

I made a test and i confirm this. The fireballs destroyed the terrain under the fence, but the fence is ok.--TheDekuLink 12:53, 20 December 2010 (CST)

It seems that if fence is placed on top of dirt, it won't turn into grass. Removing the fence, waiting a few minutes for the dirt to change, then putting the fence back seems to solve the problem. Ghost2 23:49, 27 December 2010 (UTC)

Standing on top of fences[edit]

I noticed in SSP just now that I am able to stand, and even walk, on fences. My avatar is simply walking up them as if they were stairs. Is this recent? I seem to remember that this wasn't possible before. LTK 70 21:50, 20 January 2011 (UTC)

I created a balcony made of planks on a high cliff, and when attempting to line the edge of the balcony with fences they were invisible. Fences at that altitude when placed on grass still render, and even placed on floating wood render, but for some reason on the balcony with a sheer drop they do not. Has anyone else noticed this? Schizmo 12:25, 24 January 2011 (UTC)

I haven't noticed it myself, but I do know there is a GetSatisfaction thread about invisible fences, you could try looking for answers there:

I've noticed multiple times during game play that, when you hit any kind of mob, friendly or hostile, you can actually send it over a fence. I have done this multiple times with cows, sheep, and pigs and it never fails to work. I've also found that, if a spider wants to get you and the only thing in it's path is a fence, even if the fence is on a wall with no lip, the spider can actually manage to jump over it. Is this a glitch, or, at least, is the spider thing a glitch? Obviously there are plenty of ways to keep spiders from getting to you but is 1 row of fencing not supposed to be effective?

Spiders can jump over anything. That's why you build a moat.

It's Feb 26th, has anyone seen if the multiplayer bug has been fixed? If so, we just need to update the page as it says "which is due feb 22" –The preceding unsigned comment was added by Shig iii (Talk|Contribs) 21:03, 26 February 2011. Please sign your posts with ~~~~!

In SMP I've seen fences wired to levers with redstone to disappear in rows to act like castle gates. Anyone with the know-how care to add a tutorial or at least mention its existence on the fence page?--Agent Muu 18:58, 24 March 2011 (UTC)

In SMP (not sure about single player) fences are sometimes invisible when you place them at certain altitudes. I have so far only seen this at level 80. I placed two fences on dirt blocks at level 80, and they were invisible. When I placed a dirt block right next to the fence, however, the fence suddenly appeared. Once I took the dirt block away, the fence was invisible again. This has happened so far in two different spots. --Mantalayer

It does occur in SSP, I was building a tall flagpole and it occurred. This is also mentioned above: Invisible Fences over cliffs --HexZyle 14:14, 12 July 2011 (UTC)

fences are the only 1 1/2 high block, so they can have water/lava running over then while forcing mobs and drops to go 1/2 block higher. you can push mobs higher up in "tail" traps to a fiery lava death. and it can be used to block mobs from while letting drops move through on currents. very useful for traps!

I used fence to make two adjacent rectangular pastures that share a side, and I put cows in one and sheep in the other. A few days later, I see that one of the sheep made it into the cow pasture somehow. Any ideas? I suppose it could have spawned there, but it's unlikely as the number of animals in the area was probably well over the cap.

Is anyone else hating the fact that fences attach to blocks now? I like to make my house/base/fort (whatever you may call it) neat and nice. Guess you could say I OCD it, lol. Anyway, my point is how do I put up a fence next to other blocks (ex: a wall) and have it look nice when the fence attaches to the blocks? --Throex TALK|CONT 22:28, 6 November 2011 (UTC) 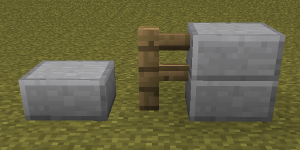 I see what you are saying but the point is to have the fence post coming out of the ceiling and then have note block attached to it so that it looks like a speaker is hanging from the wall. If this makes no sense I can take a photo and upload it to show examples of what I want to do. The fence attaching to the block makes this look like crap and impossible to do. --Throex TALK|CONT 22:46, 6 November 2011 (UTC)

I found that wooden and netherrack fences don't connect, and the resulting gap is big enough for players to walk through. I spawned a zombie, attacked it, and found the AI could not find a way past it. Couldn't it be possible to create a "wall" of alternating fences to keep out hostile mobs? (Except maybe spiders. And endermen.) Darthmaul22 00:25, 8 April 2012 (UTC)DarthMaul22

Is this really a bug?[edit]

From the article: "If you place a fence on the side of a block, you will be able to walk on top of it without jumping. Even if there is another fence on top of it, you can still walk on the top of the first fence and therefore jump to the second. Works with nether brick fences too." Is this really a bug? I noticed it when I was playing earlier and it didn't even occur to me that it would be a bug. It seems to make perfect sense to me that it would work this way. How else should it work? 124.171.164.4 14:14, 3 June 2012 (UTC)

Seem that fences don't block tree leaf blocks when trees grow up, and this result on vanishing fences. This is really annoying when trying to make a fenced tree farm with a 1 block wall and fences on top, low oak trees always "eat" the fences. --Wolfolo 11:52, 27 August 2012 (UTC)

Now that fences are useles...[edit]

I vote for a section explaining that since 1.5 fences have been made useless and for the devs' absolute lack of action towards restoring its a normal attribute, now it is the standard behavior to let mobs phase through it like ghosts. (If you are not aware check MC-2025 on the bug forums).

Anyone opposes to an explanatory note on the article?

That is a bug, fences work fine for me.

I just saw an interesting post on the forums, which claimed in passing that large numbers of fences produce lag. Anyone over here seeing that?? --Mental Mouse 13:19, 5 July 2013 (UTC)

It might be an issue for low-end machines, due to the amount of geometry that has to be rendered. Doesn't have a significant effect on frame rate for me, though. -- Orthotope talk 01:31, 6 July 2013 (UTC)

So the script for the fence recipe is showing wood planks in addition to sticks as being necessary for the build, while the YouTube video at the bottom (and common practice) shows that sticks should be in place of the proposed 'wood planks'... I looked to edit the recipe section but found no joy, anyone want to help update this section?

I, too, came here looking for the 1.7.x recipe, and went to page history to find it. Is there any reason why we can't just display a second recipe, below the current recipe, and note that it's for versions before 1.8? An awful lot of people are still playing 1.7.x. This may not be valuable 6 months from now, but for the moment, would it be a problem to put a "And, the following out-of-date recipe is the one needed for PC version 1.7 and earlier" note and recipe in the article? Xplosionist (talk) 14:13, 9 October 2014 (UTC)

Grammar mistake of the report of the update.[edit]

1.5 Fence corners now have a smaller collision box, allowing players to fall through the gap in the middle of four fences placed in a square. 1.6.1 13w16a Mobs can be tied to fences. 1.8 14w32b Fences have a new crafting recipe, producing 3 fences instead of 2.

In console edition, the crafting recipie is different.

Comments are not particularly visible if the visual editor is used, which is true for most new editors (and it is probably fair to assert that it will nearly definitely be a new editor who changes the recipe). Vandalism is defined as a malicious action, which a recipe change may not be (if the comment has not been read). Considering that, and the details of the comment, it seems to be a bit too harsh. Suggestion: rephrase the comment as: "This wiki does not list outdated recipes in crafting sections. Do not change this recipe back to the old all-sticks version. You will be reverted if you do." Corrections may be required.

It hasn't happened in over a year, I'd be in favor of just getting rid of it. Maybe have a solution more geared towards making it plain on the page that the crafting recipe is a change in the most recent (several) versions.
Andesite looks really bad in the same way. May be something to do with having multiple crafting sections? – Sealbudsman talk/contr 16:15, 12 February 2016 (UTC)