"As of Beta 1.5, the FPS shows the same number as chunk updates." - that's not strictly true; when paused (i.e. in Game menu) or during the first few moments back from pause, chunk updates whill show 0 while FPS will show a plausible value. During game, the two values may also differ a bit occasionally. Could this be not a bug after all but but rather just reflect the way chunk updates are scheduled?

"If you go to menu with the f3 menu open it stays open and if you then go to the main menu it stays open and the red bar becomes green." The colors actually indicate whether the latency is below a certain value or not. Red indicates the latency is above, and green indicates if the latency is below. Green is good and red is bad. It just so happens that in the main menu there's very little to render and so the latency is very low and is pretty much green. However on a fast computer, the bar does become green while ingame and on slow computers the bar will stay red, even on the menu screen. Retep998 21:24, 19 June 2011 (UTC)

What this article currently says about what the graph shows, as far as I am aware, is currently incorrect. The red and green bars produced by the graph are representative of the current framerate which the game is running at. Green seems an indicator for above or equal to 60 frames per second, and red is defined as anything below. However, the graph does sometimes display some extra white bars which appear either on top, or more likely, behind the framerate graph but larger bars. This may be an indicator of latency, I'm not fully sure, however playing in single player would depict otherwise as they appear there too, unless in SSP the white part of the graph defines different data than in SMP. This or you can give yourself more server latency by switching to 'Power Saver' performance under video options, which certainly doesn't sound right. (P.S. If in the current article context, 'latency' is defined as the latency occurring from the GPU in actually rendering the frame, I would highly recommend a change of terminology to avoid confusion.) -TheWyo 22:30, 16 August 2011 (UTC)

I always thought this graph was time spent. The colours are for different things (tho the threshold effect of green->red may also be correct). I believe white has to do with particles. Notice how the graph behaves when entering a new area, vs standing still until the world is completely rendered/loaded.
--GufNZ (c: 01:21, 17 August 2011 (UTC)

Depends how you define 'time spent'. Time spent doing what? White may have something to do with computational time but red/green is definitely framerate. Just playing with the video options can show you that immediately if you have a mid-range GPU or if you compare it between computers of different specs. -TheWyo 18:52, 17 August 2011 (UTC)

"which also was considered cheating and took away from the game. Because of this, the Entity ID label was removed in Beta 1.8."

Why was the seed removed from SMP?[edit]

To prevent people from loading the same world in singleplayer creative, and using xray to find dungeons/etc. People seem to be less interested in seeds today than before, anyway. Calinou - talk × contribs » 20:39, 2 April 2012 (UTC)

I think that Raw Lighting should be Resulting lighting, because raw would mean before. Pokechu22 23:53, 2 January 2013 (UTC)

We really need an updated screenshot...[edit]

Why do more than half of the names in the "Legend" section have a footnote asterisk yet the footnote is never defined? Atypicaluser (talk) 11:50, 24 August 2015 (UTC)

It's actually mentioned above the table: "When displaying reduced debug info, only the starred items are included." -- Orthotopetalk 15:34, 24 August 2015 (UTC)

Why does the page for "Lag" or searching for "Lag" redirect to this page? The Debug screen has nothing to do with client- or server-side lag, unless you're counting framerate drops (which are far different from actual tick lag). TheBuilderOfEmpires (talk) 21:17, 18 April 2016 (UTC)

I am not sure if this information is the same for everybody, but for at least me, this is all the information the Profiler can show: 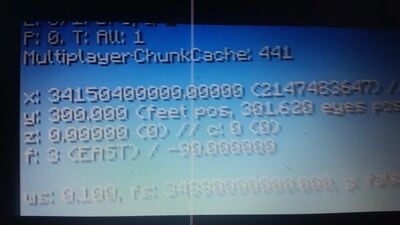