I've always thought that with all the similarities of redstone dust and glowstone dust would mean something, I would probably suggest this as the daylight detector. Creeperlunatic 01:32, 6 December 2012 (UTC)

Jens has also stated that there would be an Allocator block(with a different name) capable of transporting items into Chests and similar containers. I couldn't think of a better place to suggest this, but how about a page on that? 62.195.80.189 12:23, 19 December 2012 (UTC)

It's a bit early to create such a page, given that we know almost nothing about it beyond what you just said. Once it appears in a snapshot, or if he provides more details of how it will work, a page should be created. -- Orthotope 13:04, 19 December 2012 (UTC)

Through testing, i have found Daylight detectors to detect normal light (from torches, glowstone etc.) BUT ONLY if it is not exposed to ANY skylight whatsoever, (even light from nighttime, which makes the device output no signal, will overwrite the light from the torches/glowstone) Will post pictures ASAP --204.14.13.53 12:56, 4 January 2013 (UTC)

No, the daylight sensor does not invert when you cut it off from sunlight. It simply glitches. MINEBLEMONE 04:56, 8 January 2013 (UTC)

I must note that in 1.7.10 it certainly can detect light from furnace if isolated from other light sources. I just finished building charcoal autosmeltery that uses this feature. So I guess it does measure other things than skylight. --46.42.18.81 16:06, 24 July 2014 (UTC)

Negative, I have my light sensor in front of the furnace, surrounded by regular solid blocks (with furnace acting as one of them), and it gives off power when and only when furnace is active. All tests were done at noon with daylight cycle stopped. To clarify: place a light sensor, a bit of redstone, a furnace so it faces the sensor, and surround it all with blocks until you get 3x4x3 box. You will be able to get readings from the block redstone points at. MCEdit Schematics file can be found at goo.gl/AnvMJs
EDIT: Though your idea is interesting. I'll try and surround the whole contraption with solid box. --46.42.18.81 06:27, 25 July 2014 (UTC)

Just to check (I don't use MCEdit), a 3x4x3 box won't completely cover a furnace, daylight sensor, and redstone dust (you'd need a 3x5x3 box). If you're using the furnace as one of the box blocks, then sky light can get through it to the daylight sensor when the furnace is lit. —munin ·

Sky light can travel sideways just like block light. Sky light 15 can affect things up to 14 blocks to the side, so your roof would need to go out 14 blocks on every side from the furnace (obviously encasing is easier). The only differences between block light and sky light is that sky light 15 propagates downwards without change through most fully-transparent blocks but block light would lose 1 level per block, and some block updates only occur with direct exposure to sky.

"…Why couldn't they just use blocklight value…" -- because it's a daylight sensor? : )

Before daylight sensors we used to build light sensors with the dirt-grass or water-ice changes, but that's slow and not so reliable. Tall grass and flowers planted by bone meal dispensers might be faster now (though I've lost track of in which versions they uproot in darkness). —munin ·

The page for this block states to invert the signal you can use a NOT Gate using a redstone torch, however this inverts the digital signal. To invert the analog signal one can use two comparators in subtraction mode with a lever or other high signal redstone device attached to input A and the Daylight Sensor attached to input B. In this form the output will be high during the night and gradually lower during the day until it reaches 0 at noon and then will ramp back to high towards the night again. Here's a video showing how this works Minecraft 13w01b Analog Test 2 (Don't link this video on the main page as it's unlisted on youtube and I plan on moving it to a different channel) Antiroot 14:40, 5 January 2013 (UTC)

This line in the trivia, "Despite most of minecrafts technology appearing from around the 18th century, the Daylight Sensor is a more modern thing." is worded horribly. Can't think of ways to fix it right now, but it just looks really bad. Zachman3334 00:52, 8 January 2013 (UTC)

That and substances that respond to sunlight aren't necessarily modern. If anything, Nether Quartz and Redstone might theoretically make this magical. Cobalt32 23:02, 9 January 2013 (UTC)

Redstone is like electricity, and electricity was found in the mid-19th century. It's slightly later, but not very modern. HotdogPi ⑬㊲ 22:33, 23 January 2013 (UTC)

I dont think minecraft is based around any time period but combines things from all time periods e.g. modern circuitry and older style weaponry. Rolding 10:17, 5 February 2013 (UTC)

These can be useful for jails. You must get in at day and can get out at night. The problem is that can daylight sensors be placed onto iron doors? I'm trying to make a server so plz help. Thanks: :) ppaxson

The description says the output varies with light level; however, the charts indicate that output actually varies based on time and weather. Because different conditions can produce identical outputs, the suggested devices such as "daylight indicator" would not be reliable. In reality, this is a modified clock, not a light sensor, and it's far less versatile than it could be with minor changes. For example:

Daylight Sensors and NOT Gates[edit]

I have been trying to hook daylight sensors to NOT Gates to invert the signal so it will provide electricity when there is less light, with no success. Can anyone tell me how to do this? A picture would be best. 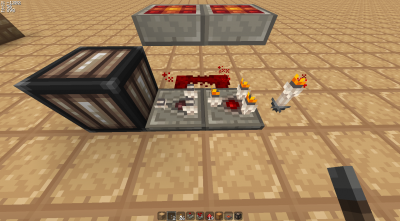 Sir, this is what I use for properly controlling groups of lights at night: It uses two daylight sensors (but one can be used with slightly less accuracy), two comparators, two dust, and one torch. It uses a 2x3x2 footprint so it is very compact. The lights will turn off and on when the light level is above or below 8, which is when daylight is bright enough to shine indoors even on the 'moody' setting.

To explain, the rear comparator is in subtraction mode. The torch behind it is inputting a level 15 signal. The front comparator is in comparison mode, and both comparators are receiving the same amount signal from the daylight sensors. What happens, is when the daylight sensors reach level 8 signal (thus level 8 lighting) the rear comparator does this math: 15 - 8 = 7, which then means the front comparator sees 7 < 8 and therefore cuts the signal. This particular design will not work for any light level other than 8, however for automated lamps, those levels are most comfortable to switch from synthetic light to natural light during.

The daylight sensor currently is a half block which does not allow for upside down placement, this prevents running Redstone wires underneath the sensor so as to power them from a distant source. It also keeps us from placing them flush with the ground, or flush with elevated half blocks for purposes of decoration and roofing.–Preceding unsigned comment was added by 99.88.186.46 (talk) at 17:53, 1 April 2013‎ (UTC). Please sign your posts with ~~~~

The daylight sensor, when surrounded by solid blocks on all four(4) sides, during a period in the night it will emit a 1 block current for short bursts of time around it, or pulse. This is useful when you surround it in RedStoneLamps since they will be powered by the pulsing sensor. This seems to work only between 14300 to 21640 at night. This means only during that time does it emit this pulsing signal, and during the day it is off. This also doesn't seem to be affected by rain. Also unaffected by being covered in shallow water or more solid blocks, seemingly unaffected by light levels at all. Its almost like a caution light, for the worst time of night when the mobs spawn.

I hope this isn't a bug, its pretty cool and I look forward to implementing it in future projects.

"As a Weather Monitoring Station"[edit]

Snippet from the article:

Could someone post an example of this or describe exactly how to build one? This could be really useful to me. I'd like a circuit that can control a group of lamps, by turning them on at night, but also turning them on during daytime-rain without turning them on in daylight alone.

What the daylight sensor measures[edit]

The daylight sensor measures a combination of three values: