Sort of; the Item IDs are the same [and if I understand correctly they're the same for the other dyes as well], but which dye the item actually is is determined by the variable that most inventory editors reported as "damage." Unless, of course, I've misunderstood the discussion about them; I haven't tried hacking the game myself so I can't speak from experience. - SoNick (Talk | Contribs)

Ah, I see now. It was probably just coincidence that the game chooses Ink Sacs when decimal 351 is spawned, possibly because Ink Sacs were first in the code or something... Anyways, thanks for the help! Firewolf34 04:10, 15 January 2011 (UTC)
It's because items start off with a damage value of 0 , and 0 is for inc sac. Changing the damage value changes the type of dye. LB 00:38, 21 February 2011 (UTC)

I maked the Brown Wool,you can just craft it like other dyes. The Dark Killer

Cocoa beans can now be planted onto jungle trees as of the latest snapshot. They will not work on any other types of trees. I wasn't sure where to post this info, so do whatever you want with this. - BM 13:27, 10 May 2012 (UTC)

Speaking of that, could someone please replace the imgur link with a picture here in the article? Marksmanship 18:50, 10 May 2012 (UTC)

I was just openly wondering whether this page belonged in the 'removed' section, as it's something that was never really playable, but is planned to be added to the game in future. It's pretty vague though, what with that the quiver never had a use and the fact that lanterns may never exist. Troagador 20:36, 15 January 2011 (UTC)

For future development it would be good if they were some sort of seed you could obtain from hoeing ground rather than being unobtainable. Chappens 03:29, 12 April 2011 (UTC)

Cocoa beans were added to the game as unobtainium. They haven't actually been removed, they are however unobtainable without cheating/hacking. it's not as blue as it looks 04:53, 21 February 2011 (UTC) 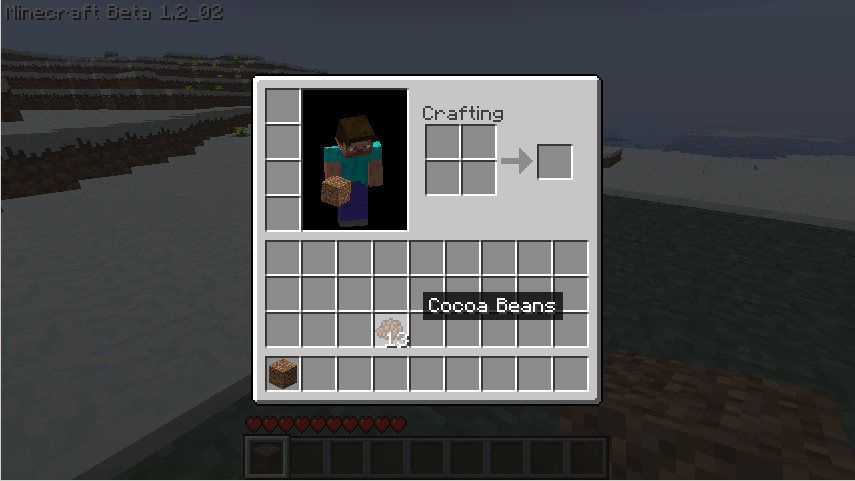 Does someone actually know which ID this item have ? –Preceding unsigned comment was added by Anavrins (Talk|Contribs) 04:19, 28 February 2011 (UTC). Please sign your posts with ~~~~

In all honesty, Cocoa beans should have their own ID in order for people to have Role-Playing servers, as they cannot use /give to get Cocoa Beans; only ink sacs, and that doesn't really work well. Alanydor 19:00 9 April 2011 (UTC)

You can't. At least not with /give. You also cannot spawn the things to make it, unlike other dyes. This means the only way to get it is with toomanyitems. Therefore, it is likely that if someone has 64 cocoa beans, they have toomanyitems or xray. –Preceding unsigned comment was added by PixelScientist (Talk|Contribs) 16:38, 2 August 2011‎ (UTC). Please sign your posts with ~~~~

TMI had a patch saying you can't spawn stuff without being an op. Also, it uses the /give command, so cocoa beans are a rare thing on SMP non-bukkit. On my server we collect them and we have this contest to see who has the most brown wool. we jump at the sight of brown sheep. We are carzy about nonspawnables. PixelScientist 00:42, 2 September 2011 (UTC)

1. The history section has been merged with the general explanation at the start. 2. The convention is to show all old versions of the sprite, but here that was taken out. I wish to know why were thous changes made, because the edit that did that had no explanation.--Yurisho 21:35, 22 May 2012 (UTC)