With the aid of [[Cartograph]] I've gone clay hunting, and I've found 3 on land and 18 underwater. How is clay "usually" above water and exposed? Also, does desert sand count as sand where clay can spawn or only coastal sand? I've looked but I've never found desert clay... Retep998 22:11, 26 November 2010 (UTC) 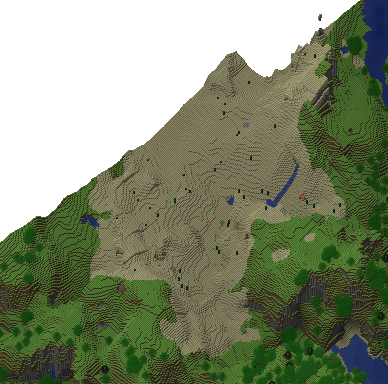 I just checked the 1.5_01 source code; clay does not make any check whatsoever for water. It simply picks a random area, and replaces all sand blocks in the area with clay. -AlphapT~C 01:51, 30 April 2011 (UTC)

I think it's possible that clay is equally likely to be found near lava pools as it is on the edge of bodies of water. In Paulsoares's Man vs Minecraft video, you can clearly see clay near a lava pool: http://www.youtube.com/watch?v=gkhxx-Vp6Ww#t=9m12s

Since clay is rare to begin with, i haven't been able to find a lava pool with clay on my map; has anyone else seen this? –The preceding unsigned comment was added by ThePirateKing (Talk|Contribs) 08:00, 28 January 2011. Please sign your posts with ~~~~!

I have actually found clay in an underground cave next to gravel and water, was very suprised, will provide screenie soon, oh wait, nvm, was a mod Stepanma01 07:58, 18 April 2011 (UTC)

Don't know if this as a glitch or not but was underground on a server placed ended up getting trapped by a river tried to place a gravel block in front of the hole the water came out but hit next to the flow then blocked the flow but when i reclaimed my gravel it had turned to clay. --Daveie 11:59, 12 March 2011 (UTC)

Can those who are adding the claim of water + gravel = clay to the page PLEASE provide evidence on a mod-free copy of Minecraft of this? I am unable to replicate that claim. CobraA1 20:51, 24 April 2011 (UTC)

It would be nice if Mojang included a game mechanic for users to create clay blocks from gravel. Simply placing gravel next to a water block source and a sand block while also touched by natural light then placing bonemeal by the user on said gravel would yield clay. But, only when those conditions are met. The Gladman 12:34, 1 November 2012 (EST)

On a 1.6.6 multiplayer server i was walking in a straight line (matching x and z coordinates) and found a small section of clay. There was only about 2 pieces of actual clay, but as i continued to break the sand looking for more, it would turn into clay pieces. Is this a bug? –The preceding unsigned comment was added by Ruru3777 (Talk|Contribs) Please sign your posts with ~~~~

Clay is still the same texture and color it has always been. The page would no doubt have been updated by now if that were the case..If your clay is red in-game, you're either not looking at clay, or you have a texture pack.

Move this article to Clay page[edit]

The Clay naming scheme is horrible...! There are Clay, Clay Brick, Clay Brick (Block), Nether Brick, Stone Brick, etc. These block/item types are all specific in description/function, so the names for them should be specific as well. The source code might have different names used for each of these items. I suggest moving this article to Clay and deleting the original redirect, since Clay exists initially as natural clumps/patches of clay, so there is no need to use (Block) to describe it. Clay "balls" can be renamed to another name (can check the source code for possible different name since official tag is Clay by itself). Clay Brick should stay as Clay Brick or can even be changed into Brick of Clay if there are future additions of other types of brick/bars(Nether brick/bar?). The Block made of clay bricks should be changed into Clay Brick (Block) to preserve the description and prevent confusion. Lastly, the page Bricks should be made into a disambiguation page linking to all the different types of bricks (Clay Brick (Block), Nether Brick, Stone Brick). The Clay Brick can be linked too, with a description telling it apart from the others. And then all the clay pages can have the template used for ingots, ores, and blocks. I can do all this once the pages are deleted or moved. - Asterick6 09:23, 29 October 2011 (UTC)

While i understand your concern, i personally agree to some extent that the clay pages should be better marked and contained in their different articles. However, with what you say about coming up with a name doesn't seem appropriate to me by any means, if the game calls it "Clay" and it is meant to be the block, then Clay (Block) seems appropriate for me as it is what i would search for it under. The Clay balls however, well, they're called Clay too. So Clay (Item) may be appropriate here. Trying to come up with names to items that are already designated to have a name, regardless of collisions, shouldnt be modified. I would never look for "Brick of Clay" since the clay brick item is just called "Brick." I do not disagree however that a Bricks page should made into a disambiguation page, as i know of no single item out there called "Bricks." Overall. Yes things should be organized a bit different, however coming up with names for items should be avoided at nearly all costs to prevent any confusion. The ()'s for disambiguation seems to be working for this wiki. Kalbintion 04:32, 6 November 2011 (UTC)

Does that section really belong here? What's being smelted are the clay ball items, not the block this page is about. -- Orthotope 19:04, 29 October 2012 (UTC)

Good catch, I've removed the section and asked the editor if they had a reason to add it besides simply making a mistake. --timrem 19:21, 29 October 2012 (UTC)

Does a shovel enchanted with fortune grant you more clay? –Preceding unsigned comment was added by AngelOfAtheism (talk • contribs) 12:56, 29 June 2013 (UTC). Please sign your posts with ~~~~

Confirmed, it does not. The maximum and the only amount of drops is 4 clay. Fortune just increases the chances for more drops on blocks drops which are not fixed, such as Glowstone and ores. MYL25 (talk) 12:52, 9 October 2013 (UTC)

Missing history: clay blocks used to be a reddish brown in beta[edit]

He uses a custom texture pack which changes the color of clay; it's never been red in the default textures. -- Orthotopetalk 20:41, 18 August 2014 (UTC)