I've seen many references to altitude refering to sea level as 64, and the articles about where ores can be found are inconsistant. That's why I started this page - please help improve it! Tim McCloud 22:09, 9 January 2011 (UTC)

Does all of this information still apply to the End?

As the Map article points out, it's possible for lava to appear at sea level (and above?) in certain biomes. Whether it or other placement levels are affected by biomes, I do not know. I have, however, seen lava myself all the way up at 6 blocks below sea level on a map from the middle Alpha days. Just some info to consider. — MK (c/t) 11:35, 14 January 2011 (UTC)

I've seen lava on land (I had a forest burn down when I first started my world because of this random lava pool, around, or a few blocks more than sea level.) The last version before this current version JeffBobbo 13:03, 14 January 2011 (UTC)

At least in Beta now, lakes of lava even high above sea level are not very rare. I have too had them to start random forest fires, which is quite annoying but interesting to spectate. :P --TheKax 11:14, 19 February 2011 (UTC)

What are the occurrence possibilities of different materials in different altitudes in the Nether? --Flajuram 14:54, 10 April 2011 (UTC)

What do you mean? How is Glowstone altitude independent if it's more common on the ceiling? And there isn't really that much stuff in the Nether anyway. JesusChrist666 17:39, 10 April 2011 (UTC)

I think I'll make a graph of it when Creative Mode arrives, to be able to walk through it without respawning all the time. VictorJavAdore 12:57, 9 August 2011 (UTC)

Section added. Soul Sand is most common around layer 60; there's a smaller peak at layer 22, but it's hard to get to, being under the lava ocean. Glowstone is most frequent near the ceiling (layer 104), but occurs at a fairly steady concentration between layers 32 and 90. Orthotope 03:54, 17 January 2012 (UTC)

Clay does not require water[edit]

As obsidian is very closely related to lava, is it correct to say that there is so much obsidian at certain altitudes, where it could be simply the combination of water and lava (e.g. occuring due to special circumstances, and not due to it existing naturally) --Gemberkoekje 14:26, 16 May 2011 (UTC)

Reason behind the reduction of placeable block altitude?[edit]

I came to the wiki to find out if there were any theories as to why, probably, Notch changed the height at which the highest blocks could be placed. Anyone have any ideas? Trivia or not, I want to know! Feylias 05:24, 9 June 2011 (UTC)Feylias

I was wondering, if you have a mod that increases the skybox and then the mod breaks via an update, will the blocks still exist above the top layer, or will they despawn? I know mods go in and out of usability constantly due to updates and I don't want my work to be ruined if the mod stops working.

It will most likely crash as minecraft attempts to load in information that it doesn't have the capacity to hold. Same as when you have a non-vanilla item in your inventory and switch back to vanilla code, the mod item crashes your save. (Only guessing though. You will have to test it) --HexZyle 04:24, 15 July 2011 (UTC)

I think they may despawn. I don't know this though. I think that because I know that placing blocks exclusive to 1.6 in a world, then playing it with 1.5, causes those blocks to be nonexistent. I think Minecraft will just ignore any data that it can't load, and the blocks would get completely deleted as they are saved over without the unrecognized blocks. 99.107.199.30 03:16, 30 June 2013 (UTC)

Scalable version of the graph, with a larger map[edit]

I'm currently doing a scalable version of the graph (I mean, a program that writes a SVG file for any McRegion map). I'm still having some bugs with text, and I still have to do the blocks' captions, but I'd like to know what you think of it, and what improvements I could bring to it (I'm not using any pre-built libraries for the display, so everything should be possible). There is the link : http://www.minecraftwiki.net/wiki/File:Blockcount.beta.1.7.3.svg (I couldn't create an internal link...)

Finally, I'm thinking about adding a customized graph for every ore's page. What do you think about it ? VictorJavAdore 15:52, 8 August 2011 (UTC) 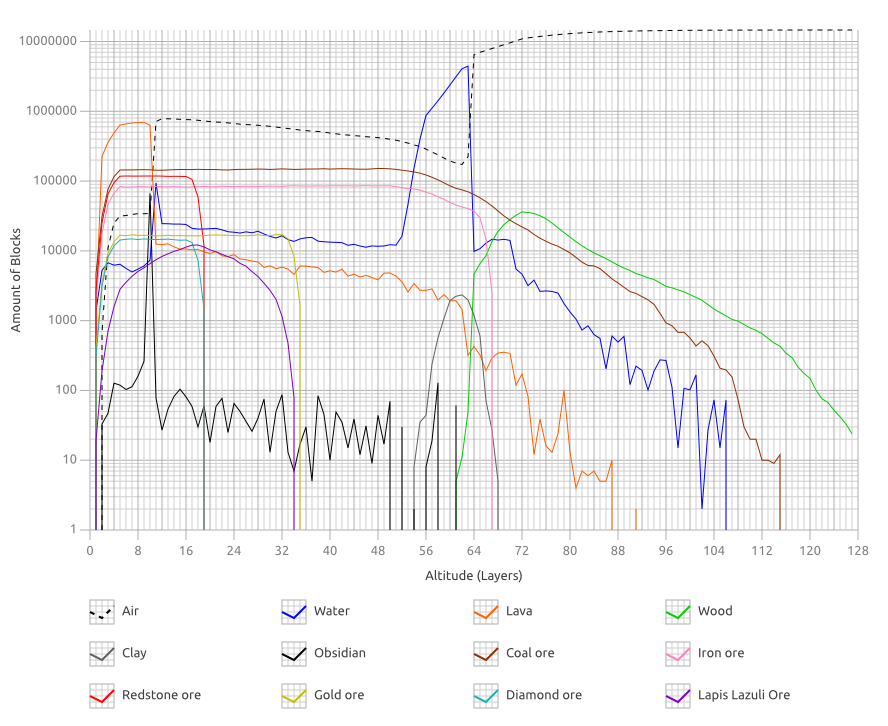 I converted it to PNG due to bugs I encountered with SVG here. If you have improvements to propose, I'll be pleased to perform them.

My map is now 250MB big. There are some conclusions I would make :

At the moment there have been some changes due to new terrain features.

I've just made a new graph and updated the table for 1.8.1 Update.

About %, I think it would not make the graph much clearer, and it would make it seem to have more precision than it actually has. To see 100%, look at the air graph around 127... However, I can understand it could be useful to use such data for the pages of individual blocks. It could be a nice idea to put a non-logarithmic graph in each block or ore page with the percentage. But since I've stopped playing Minecraft because of a huge loss of time, I don't really feel like it.

I'll try to make a graph for the Nether soon, but I don't think I could be really interesting (I think the blocks' distribution is quite constant). VictorJavAdore 13:12, 15 October 2011 (UTC)

The table at its current state is quite unuseful, and often erroneous. The arrival of new, more reliable data about altitude distribution of resources (see new graph) creates a nice occasion to rebuild it.

The "implement needed" field is fine, quite useful, we should keep it. But the "commonly found up to", "rare between" and "none above". IMHO we don't generally want to know where a resource isn't, but where it is. (Well, this only is a formulation issue.) Another problem is : these fields assume the resources are all commonly found up to the bottom, which isn't true : they all get rarer from layer 3 and there's often none in layer 0, due to bedrock. A third problem is that these fields contain highly conjectural data that would really need citation.

What I propose is 2 fields : "commonly found between" and "ideal layer" (in addition to the "implement needed" field)

I was just reading the page and noticed someone cant do math.

It states "with the player's eye located 1.6 blocks above the layer the player is standing on." But after that it says "a player standing on a shore of an ocean will see their Y coordinate as approximately 65.6." This cannot be true as it says "Sea Level is recognized as Layer 63"?

Please can someone tell me which of the 3 options are right and change this in the article.

A custom Java utility (written by VictorJavAdore) that reads the region files and produces an SVG graph, then Inkscape to convert it into a PNG. Requires some knowledge of Java to use, as there's no interface - everything is configured in the source code. -- Orthotope 09:43, 23 January 2012 (UTC)

How up to date is the graph? It isn't tagged with a minecraft version.

World was generated in release 1.1; I put that in the image description. Took a long time to generate that many chunks, so I'm not planning to make a new one for every release unless the patch notes say that ore distribution has changed. -- Orthotope 03:25, 28 January 2012 (UTC)

Okay, so I'm wondering if there is an in game map or graph that doesn't take space and shows your current elevation? I'm new to this so please be kind in your replies.

The F3 debug screen is the only option I know of in vanilla Minecraft, but it can obscure a large part of the screen, especially on lower-end machines. OptiFine fixes this by letting you turn off the profiler and frame rate graph. Rei's Minimap also shows elevation and is relatively unobtrusive (and useful). Both can be found on the Mods page. -- Orthotope 02:50, 10 March 2012 (UTC)

According to the page Ore the dirtibution is changed with Update 1.2. Everything is now a lot rarer.

Working on it, takes a while to generate a sufficiently large world. I don't know what tool Zerpa is using; it might have an Anvil-related bug. My results so far are very close to the distribution in 1.1 . -- Orthotope 08:15, 29 March 2012 (UTC)

The sea level is at 63, not 62 as the article states. Evidence: If you stand on a block at sea level (shore) like in the example in the article, F3 will showvthat your eyes are at ≈Y64.6. Eye height is 1.6 blocks above feet (also stated in article), and 64.6 - 1.6 = 63, not 62. Also, in the code it sets "average terrain height" to 63 in normal worlds (as opposed to superflat, which has average height 4 in the code), and experimenting with this value moves the sea level.

This is a snapshot of overall distribution of Emerald Ore (among others) in 12w24a. (76992 chunks generated for the moment.) However, it may be biased because of oceans.

Can someone convert the graphs to show resources per chunk at x altitude?[edit]

Askhadulin I noticed you updated the altitude picture and changed the layer definition, but the article still (mostly) uses the old definition. So, how should it be defined? Layer X is between Y=X and Y=X+1 or between Y=X-1 and Y=X? In other words, should the bottommost layer be 0 or 1? Alexiscoutinho (talk) 21:35, 5 June 2020 (UTC)