Swamp huts are generated structures that have the ability to spawn witches and (upon generation) one black cat.

Swamp huts generate rarely in swamp biomes. However, they do not generate in the swamp hills biome variant.‌[Java Edition only] 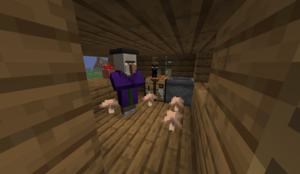 The inside of a swamp hut with a witch and black cat inside.

Swamp huts consist of a small square building made of spruce planks, with oak log pillars extending down to the ground. There is a small platform outside of the hut that could be an entrance; however, it is many blocks above the ground, and there are no stairs that go upwards to the hut. The roof of the swamp hut is made up of spruce wood stairs and spruce wood planks.

The inside of a swamp hut consists of an empty cauldron, a crafting table, and a flower pot with a red mushroom in it.

However, in Bedrock Edition, the cauldron generates with a random potion inside of it in random amounts. These potions include Swiftness, Slowness, Weakness, Healing, and Poison. Water Breathing, Fire Resistance, Night Vision, and Harming, have a rare chance of being spawned, and rarely the cauldron may contain a splash potion.

Upon world generation, one witch and one stray black cat spawn inside the hut. These never naturally despawn, however, the witch does not spawn when the difficulty is set to Peaceful.

Additionally, in the 7×9×7 area that is the hut (this is the size of the roof and one block over the porch, from one level below the floor of the hut to two blocks above the roof) only witches can spawn, while all cats (from spawn eggs, breeding and commands without cat type set) always spawn as black.

Issues relating to "Swamp hut" or "Witch hut" are maintained on the bug tracker. Report issues there.