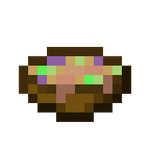 Suspicious stew is a food item that can give the player a status effect.

Suspicious stew is the only food item in the game that cannot be obtained from the Creative inventory but can be crafted and found in shipwreck chests. In Java Edition suspicious stew can be given with commands like /give, but unless NBT data like that listed in the data values section is included, consuming it gives no effect. You can trade with farmers for it, and you can milk brown mooshrooms for it.

Notice: the recipe book does not assist with crafting suspicious stew in Bedrock Edition, so the player must know the recipe.

In Java Edition, expert-level farmer villagers sell 1 or 2 suspicious stew[note 1] for one emerald.

To eat suspicious stew, press and hold use while it is selected in the hotbar. Eating one restores 6 (

) hunger and 7.2 hunger saturation and gives a few seconds of a status effect. The effect given upon eating depends on which flower is used, and is stored as an NBT Tag. The effect is not displayed in the tooltip, texture, etc., meaning that the player cannot tell in advance what the effect is unless they remember what flower they used.

The bowl is emptied and returned to the player after the suspicious stew has been eaten, and can be re-used to craft more stews. Unlike with other effect-giving foods, Suspicious Stew cannot be eaten unless the player is hungry.[1]

This section is missing information about mooshroom milking.
Please expand the section to include this information. Further details may exist on the talk page.

Issues relating to "Suspicious Stew" are maintained on the bug tracker. Report issues there.