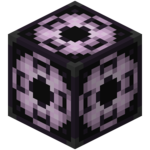 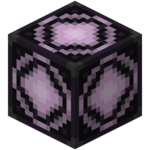 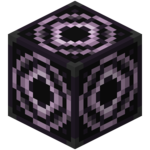 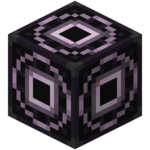 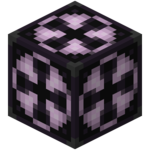 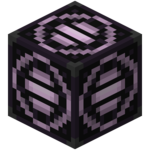 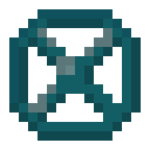 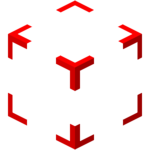 A structure block is used to manually generate structures. They can also be used to save and load structures, alongside structure void blocks.

Structure blocks and structure voids are available only using the /setblock, /fill, or /give commands, meanwhile it can be obtained in the creative inventory in Education Edition. Structure blocks when placed are unbreakable in survival and have the same blast resistance as bedrock. This is similar to the command block.

Before being placed, the structure block uses a "blank" texture in the inventory, a texture that is not used when on a placed block.

Structures saved only to memory have a higher priority than structures of the same name that were saved to disk. To remove a structure from active memory, players need to quit and reload their current game.

Switching between modes preserves the settings of the structure block wherever possible.

Save Mode GUI for Java Edition

Save Mode GUI for Bedrock Edition

Save mode allows the player to highlight a structure in the world and save it to a file.

Structure Name
The name of the structure is entered into this text box. Capital letters‌[JE only] and special characters are not allowed. Underscores (_) and hyphens (-) are allowed. It has "mystructure:" prefix on default.

Structure Size
Enter the X, Y, and Z values to set the distance from the Relative Position coordinates. This sets the opposite corner of the structure, and defines its size.
Maximum structure size is 48x48x48 In Java Edition and 64x256x64 In Bedrock Edition.
When successful, generates a white outline surrounding the structure.‌[JE only] In Bedrock Edition, the outline is green, blue, or red (depending on the axis) and the preview design can be used to see every layer of fragmented structure and to change the structure size to be saved.

Remove blocks ‌[BE only]
While saving the structure, doesn't include any blocks within structure.

In Bedrock Edition, structures are saved together with other world data rather than a standalone file.

Structure Name
The path and name of the structure file to load from.
Name is case sensitive; it must match exactly with the name of the saved structure.
This may be a file found in the /data/minecraft/structures/<folder_name> folders in minecraft.jar. To load from a folder, simply type <folder_name>/<structure_name>. The following folders exist:

Relative Position
The X, Y, and Z coordinates of the corner in which to generate the structure, based on the position of the structure block, as long as the coordinates are within -64 and 64.

Show bounding box
Highlights the outline of the structure; on by default.

Structure Integrity and Seed
Removes random blocks that compose the structure based on a user-defined seed.

Include entities
Include any entities saved in the structure file when loading the structure. Off by default.

Load
Press this button once to prepare the outline preview of the structure. When satisfied with the position, press again to generate the structure.
This process may also be automated with the use of redstone.

Corner mode‌[Java Edition only] allows for an easier and automatic size calculation while saving or loading structures.

To use, place on the opposite corner of a save structure block or a second corner structure block. Then, using a save block, press "DETECT".
When successful, a white outline appears.

Structure Name
The name of the structure on which to calculate the size and position.
Name is case sensitive; it must match exactly with the name provided by the complementary save or corner structure block.

Custom Data Tag Name
The name of the function to run.

3D Export mode‌[Bedrock Edition only], is similar to save mode, but the structure is saved as a 3D render rather than as an actual structure.[1] Therefore, structures saved this way can be viewed, but cannot be generated via load mode.

Structure Name
Enter the name of the structure. Case sensitive. The player must enter a file name in order to export.

Structure Size
Enter the X, Y, and Z values to set the distance from the Relative Position coordinates. This sets the opposite corner of the structure, and defines its size.
Maximum structure size is 64×256×64.

The difference between air (left) and structure void (right) when "show invisible blocks" is enabled.

Structure void can be placed as part of a structure and are ignored when the structure file is saved.

This results in the blocks at the location where the structure is placed being maintained and not being overridden. For example, if a player saves a 2 block high structure with air at the top and a structure void at the bottom, and loads it into a 2 block high area of stone, the top block becomes air but the bottom stays stone.

in Java Edition, structure void blocks have no collision box but have a small hitbox. Additionally, they are invisible, but are displayed as red cubes when "Show invisible blocks" is turned on in Save mode. Blocks can also replace structure voids similarly to snow and grass

in Bedrock Edition, structure void block's hitboxes are the same as a full block, and, similar to barriers, appear when held by the player. Unlike Java Edition, they can support blocks such as signs, torches, and redstone.

As there is no collision box, entities can pass through, although liquids cannot.

A structure block also has a block entity associated with it.

Note: These videos are made using Education Edition.

Issues relating to "Structure Block" are maintained on the bug tracker. Report issues there.

If Classic Textures are used, structure voids appear like