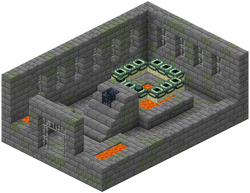 Strongholds are structures that occur naturally underground in the Overworld, and are the only way to find an end portal. Strongholds can be located by using an eye of ender.

All strongholds are located at random coordinates within rings, each ring with a certain radius from the origin – the point at x = 0, z = 0, not the world spawn. Strongholds also may extend further in or out of that area. The strongholds are generated at roughly equal angles from the center point of the world (for instance, each stronghold in a ring of 3 is in the region of 120 degrees from the others, measured from the origin). The game does not generate a stronghold partially above-ground: any portion above the sea level is replaced with air, leaving a cutaway. Strongholds may generate at bedrock level, cutting the bedrock.

Strongholds primarily generate underground and prefer to generate in biomes above sea level but generate underwater if necessary. Sometimes, floating portal rooms can be found in the ocean, where no other room would normally generate.

Most parts of the stronghold can be overwritten by ravines, caves, mineshafts, fossils or dungeons; but it is rare for the end portal to be replaced, which would force a player to find one of the other strongholds, as a portal can be activated only with all 12 frame blocks present.

In Bedrock Edition, strongholds generate randomly throughout the world. They usually generate under villages. 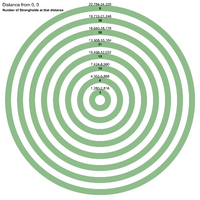 Stronghold layout through the world in Java Edition.

In Java Edition, strongholds generate in rings with the strongholds evenly spaced around the circle until the total of 128 is reached.

In generated chest corridors and storerooms, dispersed chests containing a variety of loot can be found.

Strongholds feature various types of main rooms. Each room has an entrance, which is either a plain 3×3 opening, a wall with a wooden door, a wall with an iron door (with buttons)‌[JE only], or a 3×3 opening with a grate of iron bars along the top and sides. Rooms may have exits to other room pieces or dead-end "exits" into stone. Additional "passages" between rooms may exist if their generation overlaps or if the stronghold intersects a cave, mineshaft, or other structure. Sometimes, doors can be sealed off by stone bricks, resulting in "secret doors", usually occurring with 5-way crossings.[3]

Stronghold generation begins with a spiral staircase room with a 5-way crossing at the bottom, with additional rooms being randomly generated from the exits of previous rooms up to a maximum distance of 50 rooms and 112 blocks horizontally. If a portal room is not generated, the generation is redone. 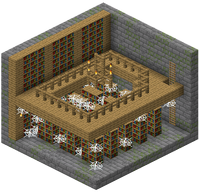 A library inside a stronghold.

Large libraries contain a second level consisting of a surrounding balcony with oak fences as railings, and fences & torches arranged like a chandelier over the center of the room. The two levels are connected by a ladder on the wall furthest from the entrance. No cobwebs generate here.

Note: This video is outdated, as 128 strongholds now generate per world as of Java Edition 1.9.

Issues relating to "Stronghold" are maintained on the bug tracker. Report issues there.