From Minecraft Wiki
Jump to: navigation, search
This article is about the skeleton variant. For the Minecraft Dungeons mob, see MCD:Stray. For the untamed cat, see Stray cat.
Stray 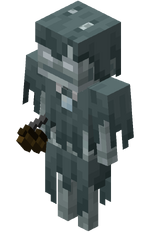 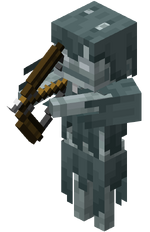 Strays are variants of skeletons that spawn only in frozen, ice, or snowy biomes.


Strays do not spawn naturally from monster spawners, even when exposed to direct sky in Java Edition. In Bedrock Edition, 1% of spiders and cave spiders can spawn as a spider jockey with 80% chance to be a stray spider jockey or stray cave spider jockey.

The stray has its own spawn egg in the creative inventory.

Strays behave the same as normal skeletons, however, they shoot tipped arrows that inflict Slowness for 30 seconds on any target that they hit. When strays are underwater, they do not shoot arrows. Instead, they use melee attacks that inflict Slowness. Strays themselves are not immune to Slowness inflicted on them.

Strays make similar noises to skeletons, with an echoing effect.

Strays have entity data associated with them that contains various properties.

Issues relating to "Stray" are maintained on the bug tracker. Report issues there.

This page would benefit from the addition of isometric renders.
Please remove this notice once you've added suitable isometric renders to the article.
The specific instructions are: strays without bows, aiming render is replaced with targeting mode