From Minecraft Wiki
(Redirected from Stationary Lava)
Jump to: navigation, search
This article is about the block. For the bucket, see Lava Bucket.
Lava

Lava can also occur as lava rivers from a single spring block, pouring down walls into pools. The spring block can be on the side of a cave, ravine, mineshaft, or stone cliff above ground.

Lava also spawns as lakes, which can be found at any elevation within any biome.

15 blocks of lava can be found in the End portal room of a stronghold: 3 along each side wall, and 9 below the portal frame.

In the Nether, lava is extremely common, appearing more frequently than water in the Overworld. Seas of lava occur, with sea level at y-level 31, about a quarter of the total height of the Nether (as the usable space in the Nether is 128 blocks tall). They extend down to about y-level 22. Lava also randomly appears in single blocks inside netherrack formations. Lava also generates as a single source in well rooms in nether fortresses.

Lava generates as delta shapes, which can be found commonly in the basalt deltas biome. Lava also generates in ruined portals and bastion remnants. 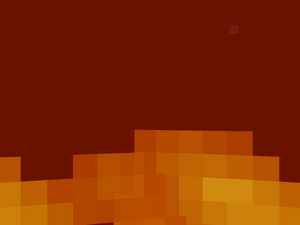 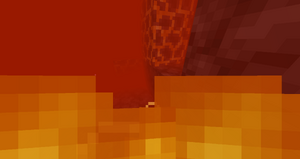 What it looks like inside lava using Fire Resistance.

In Bedrock Edition, a player with the Fire Resistance effect does not catch fire.

Vexes, zoglins, Nether mobs other than piglins and hoglins, or players or mobs affected by a potion of fire resistance are not damaged when touching lava.

The embers or fireballs that fly out of lava are purely decorative and do not cause fires or damage to entities. When rain falls on lava, the black ember particles appear more frequently.

A player in lava lasts a few seconds before dying:

The orange area represents areas
where air could catch flame if the
gray and orange areas contain
flammable blocks. The wood
is all at a safe distance.

Lava can cause fires by turning air blocks to fire blocks:

The lava of any depth can start fires this way, whether or not it appears to have a current.

Note that that an air block in the 5x1x5 area catches fire regardless of what is directly or diagonally below it. In particular, a single layer of obsidian on the surface of a lava lake does not prevent the blocks on top of it from catching fire from the underneath lava.

Lava flows from "source blocks". Most streams or "lava-falls" come from a single source block, but lava lakes (including the "flood lava" in the bottom 10 layers) are composed entirely of source blocks. A source block can be captured only with a bucket.

In the Overworld and the End, lava travels 3 blocks in any horizontal direction from a source block. Lava flows far more slowly than water (1 block every 30 game ticks, or 1.5 seconds), and sourceless lava flows linger for a short time more. In the Nether, lava travels 7 blocks horizontally and spreads 1 block every 5 game ticks, or 4 blocks per second, which is the same speed as water in the Overworld.

Using redstone wire, a one-block lava flow can be redirected by supplying power to the source block, which causes it to reset the flow toward the now-nearest terrain depression. It cannot, however, be reversed. This re-calculation is made because of the redstone wire when toggled changes the block from redstone (on) to redstone (off). Whenever a block updates on any side of the lava, the lava re-calculates where to flow, but does not cut off its current direction of flow.

Water and lava can produce stone, cobblestone, or obsidian based on how they interact. Lava can also generate basalt when above soul soil and touching blue ice. 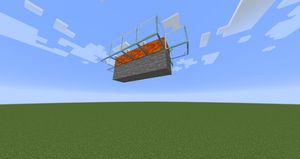 If there is lava flowing above a block, the lava seeps through.

Lava above a non-transparent block (does not include stairs, fences, and slabs) produces dripping particles on the underside of that block. These droplets do not do anything other than warn the player that a deluge of lava lies above that block. The particles function identically to their water counterparts, except that they drip slower.

Flowing lava can set off tripwires because it breaks placed string. Lava triggers a tripwire only once.

Any item dropped onto a lava source block is immediately destroyed, except for items made of netherite.

In Bedrock Edition lava can be placed in an empty cauldron.

If bit 0x8 is set, this liquid is "falling" and spreads only downward. At this level, the lower bits are essentially ignored, since this block is then at its highest fluid level.

The lower three bits are the fluid block's level. 0x0 is the highest fluid level (not necessarily filling the block - this depends on the neighboring fluid blocks above each upper corner of the block). Data values increase as the fluid level of the block drops: 0x1 is the next highest, 0x2 lower, on through 0x7, the lowest fluid level. Along a line on a flat plane, lava drops one level per meter in the nether and two everywhere else.

Issues relating to "Lava" are maintained on the bug tracker. Report issues there.