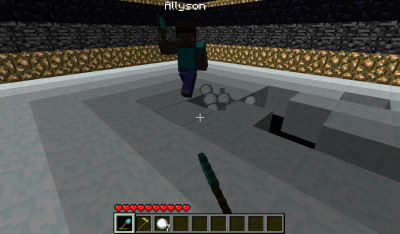 Spleef is a competitive minigame played within Minecraft. When playing spleef, players destroy blocks below other players, allowing them to fall off the playing field and into a pit. The object of the game is to be the last player on the field. The name is a play on the word grief as the game involves destroying blocks.

Spleef is played on an easily-destructible block such as snow, leaves, or TNT, with a pit located under the playing field to collect players when they lose. Players destroy blocks on the platform near or under opponents to cause them to fall, while avoiding falling themselves. Those who fall from the platform lose the round, while the remaining players win. Spleef can be played on teams, in 1v1 scenarios, or with multiple players all against each other.

Spleef has a few basic rules to ensure a fair experience without being too restrictive, but as with many activities, rules vary greatly from one server to another. 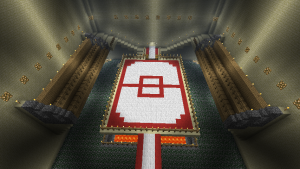 Inside of a Spleef arena. 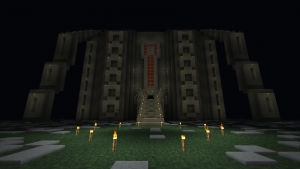 Spleef arenas are often decorated on the outside.

Since spleef requires the playing field to be easily broken, most arenas use snow or clay blocks as they can be broken relatively quickly. Some basic arenas use dirt if better materials are not available.

Spleef players should be equipped with a shovel to ensure fast block destruction.

Walls surrounding the arena are usually made to prevent players from evading gameplay. The walls are often made with hard to mine materials, such as cobblestone, brick, obsidian or even bedrock. There is often seating for spectators located on the side of the field, so that they can view the players in the arena.

There is usually a pit located below the arena with a tunnel or stairway out for losers to exit the arena. On longer drops, arena builders can use water to prevent the losers from taking fall damage.

Many stadium builders fill the pit with lava as an intimidating consequence for losing. Often they provide chests for participants to store their items so they don't lose their items if they die.

Custom arenas if you want to create a small, medium, large and expert.

Due to the flexible nature of spleef, the gamemode can be altered in many ways. A common variation is to create multiple levels of playing fields, and upon losing on one arena, you descend to the next. A common theme among variations is incorporating gameplay elements such as fire, explosions, or mobs. Some versions allow someone to destroy blocks from under the players, and others incorporate challenges such as not allowing players to jump. As stated in the rules above, hitting other players may occasionally be allowed as well. 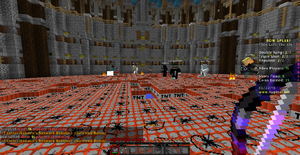 A Hypixel "TNT Bow Spleef" game in progress, which features special bows that can shoot arrows to ignite the floor made of TNT, making the TNT blocks fall down.

Instead of having to break down blocks manually, players may be given items that have the special ability to shoot projectiles. When the projectile hits a block, the block disappears. When players are on separate islands, they can still shoot those projectiles in order to cause other players to fall. This variant is usually hosted on minigame Minecraft servers, like Hypixel (TNT Games - Bow Spleef), HiveMC (Spleef, which has shovels that can shoot snowballs), and with the use of these servers, many other things can be added, such as upgrades, boosters, high jumps, explosions.

Spleef was started on a server before June 23, 2009 soon after the Classic Multiplayer Creative Mode release. The rules and name were created by Greenslimy, Pentaclam and Maulrus.[citation needed] It first gained popularity after Notch blogged about this article on his Tumblr.[1] Soon after, a plethora of spleef servers and variations sprung up. Spleef instantly caught on in Minecraft Classic, while slowly also gaining popularity in Alpha, which soon became Beta. It is considerably popular in the latest version of Minecraft today, with almost every major public server having some sort of Spleef arena.

It is questionable, but it could have started as a port from Blockland to Minecraft. In 2004, in Blockland was a "spleef" where you would throw spears at the blocks and they would disappear, thus killing anyone on them. Someone who played this may have re-created it in Minecraft and others started doing it too.

Tron 2.0 featured a similar game mode in 2002, with opposing teams using the Tron disc to destroy platforms on either side of a chasm.

As of the August 30th, 2016 update, the Legacy Console Edition of the game now includes an official variation of Spleef called "Tumble".