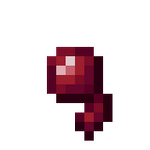 A spider eye is a poisonous food and brewing item.

Witches have a chance of dropping 0–6 spider eyes upon death. This is increased by 3 per level of Looting, for a maximum of 0-15 spider eyes.

When eaten, a spider eye restores 2 (

) hunger points and 3.2 saturation points, giving a nourishment value of 1.6. It also applies a poison effect lasting 4 seconds to the player, causing 4

damage, which reduces hunger/saturation by 6 points.

Issues relating to "Spider Eye" are maintained on the bug tracker. Report issues there.