"Respawn" redirects here. For the block to set a spawn point in the Nether, see Respawn Anchor.

This article is about the natural spawning of players and mobs. For mob spawners, see Spawner. For the player, see Player. For the egg that spawns mobs when used, see Spawn Egg.

Spawning refers to players and mobs being created and placed in the game world. 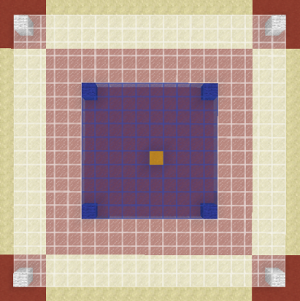 New players initially spawn within a small area surrounding the world spawn point when the server is not in adventure mode. This area is 21 × 21 blocks by default, but can be changed by the spawnRadius gamerule in both single and multiplayer. Upon death, the player respawns within this area unless the player's individual spawn point changed (by sleeping in a bed or using a respawn anchor).

Upon spawning, the player is placed on the highest block of the X and Z spawn coordinates, even if this would set the player above the maximum build height. This area does not consider the existence of a block to spawn on, which can result in players spawning above the Void if there are no blocks at that X and Z location.

The world spawn point itself can be changed using the /setworldspawn command.

In Bedrock Edition, when a player creates a new world, the world spawn point is restricted to specific biomes. The algorithm starts searching from coordinate 0,0 continuing outward until an acceptable biome is found for the world spawn point. Using add-ons, a rare biome can be designated to cause the player to spawn at a distant location, but the game crashes if the biome does not exist or cannot generate.

The algorithm searches for these biomes:

The player spawns within a 5 block radius of the point selected in the chosen biome, sometimes resulting in the player spawning outside the spawn biome, ending up at as beach, river, or swamp.

A search for a valid world spawn biome is not performed for Flat and Old world-types.

When the server's settings set the default game mode to adventure mode (using the server.properties), then the normal spawning mechanic is ignored and players are spawned directly on the world spawn. This includes the X, Y and Z coordinates, even if there is no block there and even if there are blocks above it.

If the Y coordinate is not a valid spawning area then the server looks up until it finds one, up to a maximum of Y=256. If there is space to spawn but it is in midair, the player spawns in midair, even falling into the void if there is a hole.

There are several ways to determine the world spawn point:

Sleeping in a bed allows for leniency in obstruction, in that the player respawns on other blocks near the bed if the original point becomes blocked. If the spawn point set via /spawnpoint becomes obstructed, the player is not given this leniency in respawning.

Many mobs generate upon initial chunk creation. These spawns occur only once per chunk. They are not affected by the /gamerule doMobSpawning command. 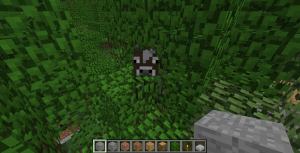 A cow that generated with the map inside a tree's leaves and could not escape, a common sight in forested hill areas.

Approximately one in ten newly generated chunks contain mobs, usually in packs of up to four of the same species. They always spawn on the highest available block in a column. For an animal to spawn on it, this block must be opaque and the two blocks above it must be transparent. The block does not need to be a grass block nor does it need to be illuminated as it does with mob spawning.

There are 2 types of animals: common animals and biome specific animals.

Common animal mobs do not spawn in desert, badlands, beach, snowy tundra, river, ocean, and mushroom fields biomes. The weight is the spawn rate for the bedrock codebase[more information needed].

Some animal mobs spawn only in specific biomes.[more information needed][verify]

Randomness for animal spawning is derived from the world seed, which means that worlds with the same seed always generates chunks with the same animals in the same places.

Most monsters cannot spawn on peaceful difficulty. At higher difficulty, most of them prevent the player from sleeping, and most of them spawn at light level of 7 or less.

Common monster mobs can spawn in almost any biome in the Overworld (except for mushroom fields). They can spawn on the surface and underground. The weight is the spawn rate in the Bedrock Codebase.

Some monsters spawn only in specific biomes.

The mobs still spawn if the /gamerule doMobSpawning command is set to false, because they spawn as part of structure generation.

Mobs are broadly divided into four categories: hostile, friendly, water (e.g. squid), and ambient (e.g. bat). Hostile mobs have a spawning cycle once every game tick (1⁄20 of a second). Friendly and water mobs have only one spawning cycle every 400 game ticks (20 seconds). Because of this, where conditions permit spawning, hostile mobs spawn frequently, but passive mobs (ie: animals) spawn rarely. Most animals spawn within chunks when they are generated.

Mobs spawn naturally within a square group of chunks centered on the player, 15×15 chunks (240×240 blocks). When there are multiple players, mobs can spawn within the given distance of any of them. However, hostile mobs (and some others) that move farther than 128 blocks from the nearest player despawn instantly, so the mob spawning area is more-or-less limited to spheres with a radius of 128 blocks, centered at each player. In multiplayer, mob caps are shared by all players, no matter where they are.

Every 24000 ticks (20 minutes) the game attempts to spawn a single wandering trader with two leashed llamas within 48 blocks of a player or at a village meeting place, if no wandering trader exists in the world. The trader does not spawn when the player is underground.‌‌[Java Edition only]

Each mob category has a separate cap and a different constant in the formula:[more information needed]

In single player mode, there are always 289 chunks in range so the caps above are used. In multiplayer, chunks that are in range of multiple players are counted only once. More chunks and higher mob caps result from the players spreading out more.

The number of mobs is checked once at the beginning of each spawning cycle against the cap. If the number of living mobs in a category is over its cap, the entire spawning cycle for that category is skipped. The area checked for mobs is the same as the area used for calculating the mob cap, which is the spawning area expanded by one chunk in every direction. 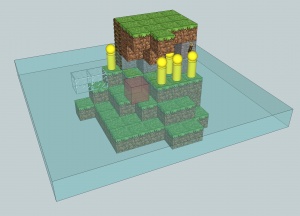 Example of a mob pack spawning. The 41×1×41 spawning area is shaded blue (not to scale). The yellow figures represent the actual positions that mobs could spawn in after checking the environment. Note that the mobs can spawn inside torch and ladder blocks. But they can't spawn on top of glass because it is not opaque. The red cube is the center of the pack. 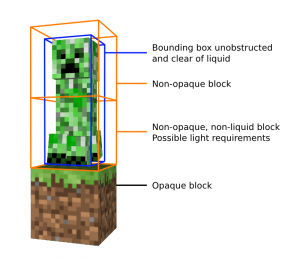 Requirements for the spawning location of individual mobs.

For each spawning cycle, one attempt is made to spawn a pack of mobs in each eligible chunk. A random location in the chunk is chosen to be the center point of the pack. For the pack to spawn at all, the center block must be non-opaque, or must not fill its entire cube, or must be powered.

If the pack location is suitable, up to 12 attempts are made to spawn up to a pack, which is 8 wolves, 1 ghast, 3 rabbits, or 4 of any other mob. The pack is spawned within a 41×1×41 (that's a 41×41 square that is one block high) area centered at the initial block. Mobs spawn with the lowest part of their body inside this area. For each spawn attempt, a block location within the pack area is chosen at random. Though the pack area extends 21 blocks out from the center, the random location is heavily skewed toward the center of the pack. Approximately 85% of spawns are within 5 blocks of the pack center, and 99% within 10 blocks of the center.

All mobs within a pack are the same species. The species for the entire pack is chosen randomly from those eligible to spawn at the location of the first spawn attempt in the pack.

In the Overworld, this depends on the location:

In the Nether, the locations are less varied:

Each individual spawn attempt succeeds only if all of the following conditions are met:

If all of these conditions are met then the mob is spawned. The pack is complete when 4 mobs have spawned (or 8 wolves, or 1 ghast, or 3 rabbits), or 12 attempts have been made, whichever comes first. The exception(s) to these rules is the ender dragon or the wither.

There are four categories of mobs: ambient, animal, monster, and water. The mob density cap for each category and location of mob in each dimension is as follow:

The following rules apply to all mobs:

Some additional rules apply to specific categories of mobs.

Pack spawning happens in two stages: first attempt to spawn surface mobs, then attempt to spawn cave mobs. Before spawning, the mob density cap is calculated based on the 9x9 square area surrounding the current chunk.[more information needed] Spawning begins by picking a random X and Z location within the chunk currently being evaluated. The Y coordinate is determined by starting at the world height and searching downward for the next block of a certain type[more information needed] with a non-solid block above it. The first such block that is found is considered to be the surface, and the algorithm attempts to spawn a surface mob pack. The algorithm then continues to search downward for the next suitable block with a non-solid block above it. When a block meeting the criteria is found, the algorithm attempts to spawn a cave mob pack at that block location. Cave spawn attempts continue until the Y coordinate reaches the world bottom, and do not stop even if a cave pack was spawned.

Surface and cave pack spawn attempts then go through the following steps to figure out what mob to spawn and how many: 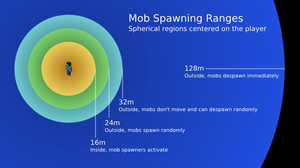 Hostile mobs (other than villagers that were converted to zombie villagers), chickens from chicken jockeys, monsters, despawnable mobs (including bats, squid and ocelots) (after having existed for over 2400 ticks), and hostile wolves can cease to exist, or "despawn", under certain conditions:

In Bedrock Edition, each loaded chunk has a 1⁄50 chance each tick of trying to despawn an entity. If selected, a random entity in the chunk is chosen and despawned, subject to all of the following conditions:

In Bedrock Edition, entities with persistence do not despawn naturally. Entities are given persistence in the following situations:

The following entities always have persistence:

Issues relating to "Spawn" are maintained on the bug tracker. Report issues there.