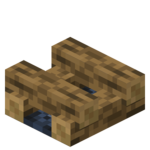 A soul campfire is a variant of the campfire with cyan flames.

Campfires can be unlit by waterlogging it (placing water in the same block space), throwing a splash water bottle on it, or using a shovel on it. As with torches, rain does not extinguish campfires.

Any items cooking on a campfire always drop when the campfire block is broken.

Campfires also emit occasional ember particles, similarly to lava. Soul campfires do not emit embers due to the fact that they are blue.[1]

Campfires damage mobs standing on top of them even if underwater (with exceptions such as shulkers or guardians), but only if lit, campfires deal 1

‌[Java Edition only] of damage every tick (although damage immunity reduces this to once every half-second). In Bedrock Edition, soul campfires deal the same amount of damage as normal campfires.[2] Unlike regular fire, campfires do not cause lasting burning nor destroy items. Damage taken is considered fire damage and is reduced by armor (which loses durability), the Resistance potion effects, and the Protection and Fire Protection enchantments. The player can avoid being damaged at all, either by using a potion of fire resistance or wearing Frost Walker boots.

The player can place raw food on a lit campfire by using the food item on it. Up to four food items can be placed on a single campfire, which cooks the items simultaneously. On a campfire, foods produce small smoke particles, indicating they are being cooked. Food items take 30 seconds (600 ticks) to cook, compared to 10 seconds for furnaces or 5 seconds for smokers. Assuming that one uses all four slots to cook at once, the Campfire is, therefore, more efficient than furnaces (taking 10 seconds less per four items and no fuel) for cooking, but must be watched so as to pick up the food and refill it once it is done. It is slower than a smoker by about ten seconds, but its lack of fuel consumption could be seen as a worthwhile trade-off. Once finished cooking, items pop off the campfire. If the campfire is extinguished while cooking food, it resets as if it had not been cooked at all. Unlike other blocks that can cook food, campfires do not require any kind of fuel. Food items can be placed on an unlit campfire. Campfires do not have an external inventory.

Placing a campfire under a beehive or bee nest allows players to harvest honey bottles or honeycomb without provoking the bees.

Soul campfires repel piglins that are not currently attacking.

In Java Edition, soul campfires can be used to convert soul sand into soul soil. If a soul campfire is crafted using soul sand, placed, and then broken without Silk Touch, that soul campfire drops soul soil.[3] This does not work in Bedrock Edition as soul sand became charcoal due to hardware issues.