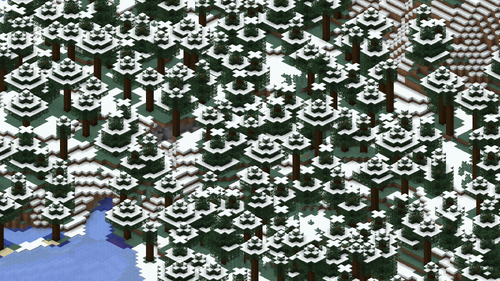 A snowy taiga is an uncommon snowy biome, often generating adjacent to or within a snowy tundra biome. The biome family includes three individual biome variants.

The very rare Snowy Taiga Mountains features much steeper terrain than the hills. Similarly to the taiga mountains, this variant can reach high elevations, but the snowy taiga mountains go higher than regular taiga mountains. The steep elevations make this biome difficult for survival. Buildings do not generate here. This biome is the third rarest in the game, behind Modified Badlands Plateau and Modified Jungle Edge.