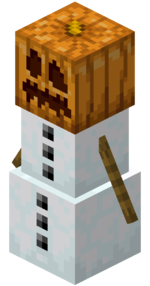 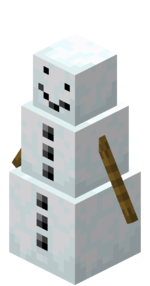 This article is about regular snow golem. For variant in Minecraft Earth, see Melon golem.

To create a snow golem, the player must stack two snow blocks, and then place, or dispense, a carved pumpkin, a jack o'lantern or an uncarved pumpkin‌[Bedrock Edition only]. The building pattern can also work when arranged sideways or upside-down, as long as the pumpkin is the last one placed. 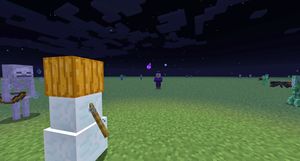 Snow golems "melt" (take fire damage) in biomes with a temperature greater than 1.0, or dry/warm biomes like badlands, deserts, savannas and in the Nether biomes. The Fire Resistance effect allows them to survive in these biomes. 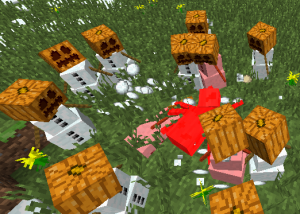 Snow golems move toward hostile mobs and throw snowballs at them up to 10 blocks away, provoking them.[2] Thrown snowballs do not deal damage except to blazes and wolves,[3] but the snowballs still knock back mobs that they hit. With the exception of wolves, polar bears, llamas, pandas, dolphins, and bees, snow golems also attack any neutral mobs regardless of whether they attacked the player.

As they move, they leave a trail of snow on the ground if the blocks can support it.[4] They produce snow only in biomes having a temperature less than 0.81, which includes cold, snowy, and medium biomes (including the End though not jungle).

Snow golems have entity data associated with them that contain various properties of the mob.