This article is about the full block. For the thin layer, see Snow. For the weather condition, see Snowfall. For the projectile, see Snowball.
Snow Block 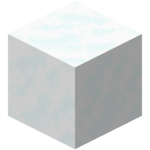 A snow block[a] is a full-sized block of snow.

If mined with a Silk Touch enchanted shovel, snow blocks drop themselves; without the enchantment, snowballs are dropped instead.

Unlike snow layers, snow blocks do not melt from higher levels of light under normal circumstances, nor get destroyed by water.

Snow blocks generate on the ground in the ice spikes and frozen ocean biomes, and they form the walls of igloos and some snowy tundra village houses.

Snow blocks are also used to make snow golems by putting 2 snow blocks on top of another and a carved pumpkin or jack o'lantern on the top as the head. Note that the carved pumpkin has to be placed last for this to work. This can be done sideways and upside-down, as well.

Issues relating to "Snow Block" are maintained on the bug tracker. Report issues there.