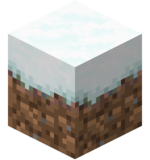 This article is about the thin cover block commonly caused by snowfall. For other uses, see Snow (disambiguation).

In Bedrock Edition multiple snow layers are built up naturally during snowfall; in Java Edition, snowfall creates only one layer.

Snow can be obtained using a shovel with the Silk Touch enchantment. Destroying snow with a non silk-touch shovel yields one snowball per layer. If it is destroyed with anything other than a shovel, nothing is dropped (even if using a different Silk Touch tool). If water touches snow,the snow yields a snowball. Snow can also be obtained by causing it to drop into an invalid block space, in which case it drops itself.‌[Bedrock Edition only] The dropped snow layer also corresponds with how many layers were in the broken snow pile. 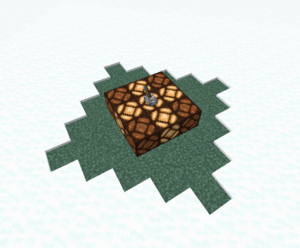 If the snow is on a grass block, mycelium‌[JE only][1] or podzol,‌[Java Edition only][1] the ground cover turns white on the top and around the sides. Snow does not damage tilled and hydrated field areas – it cannot be placed on farmland. A gravity-affected block like sand or gravel does not fall if snow covers the block below it, but the gravity-affected block does replace a snow layer when falling onto it. The texture of the dirt portion of the block also changes when snow is placed on top.[2][3]